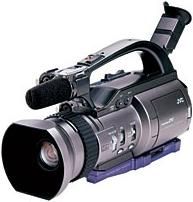 Videographers will become WebCast capable by attaching the unit to an optional KA-DV300 adapter – no PC is necessary. Or, with an installed PCMCIA card, users will be able to connect the setup to an Internet-ready computer. In this mode, the Streamcorder is designed to automatically convert and send MPEG-4 files to a specified Web site for distribution. JVC forecasts this as a valuable feature for real-time sharing of weddings, news reports or any live event.

Billed as a complete capture-edit-output solution, Ulead’s new VideoStudio 6 software sports an MPEG-Direct capture feature designed to let users snatch DVD-ready video directly from Mini DV and Digital8 camcorders without first converting it to the AVI file format. In addition, the company said that VideoStudio 6’s all-new interface features an easier-to-use, more clearly defined overlay track. With it, users have the ability to place video, still images and 3D titles on the track and create picture-in-picture effects with motion and transparency elements.

VideoStudio 6 also includes a DVD authoring wizard, as well as CD and DVD burning capabilities, and the software allows consumers to share their completed video projects on tape, e-mail and the Internet.

The Windows version of Xpress DV 3.0 was poised for release as we went to press. A Mac version is slated for mid-2002. Xpress DV 3.0 will have a $1,699 price tag. Programs slated to be bundled with Version 3.0 include Boris FX LTD (3D/2D effects), Boris Graffiti LTD (enhanced titling), Sonic DVDit! (DVD creation) and Discreet Cleaner EZ (streaming media export).

Beginning in March, Apple will offer, as an option on new systems, a GeForce4 Titanium card with 128MB of SDRAM for an additional $250 to $350, depending on the model, and as a $399 kit for existing Power Mac G4 users.