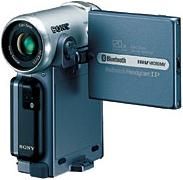 From Mini to MICRO

You knew it had to happen. Videotape has just gotten smaller. Sony’s latest camcorders, the DCR-IP5 and DCR-IP7BT, make use of MICRO MV, a new MPEG-2 data-compression technology format.


Sony said that the MICRO MV-format cams, designed so people can carry them around more easily, deliver image and sound quality that equals Mini DV, but in a smaller package. Not only are the units tiny (the IP5 measures 4.1 inches high, 1.9 inches wide and 3.2 inches deep), but they use MICRO MV cassettes, which are 70 percent smaller than Mini DV media. The new cams, Sony said, each have a 680,000-pixel CCD, and a 10x optical zoom lens. In addition, the IP7BT is equipped with a Bluetooth adapter, allowing for wireless data exchange, and a Memory Stick slot for removable media.

DVD+RW Drives Spring up at COMDEX

Hewlett-Packard, Philips and Sony each showed off DVD+RW computer drives at COMDEX 2001 in Las Vegas. These combination drives, which also write CD-R and CD-RW discs, all list for under $700, and are now out on the market. Each DVD+RW drive comes bundled with Sonic Solutions’ MyDVD DVD-authoring software.


Philips demonstrated its DVDRW208 drive, HP exhibited the dvd100i and Sony displayed its new DRU110A/C1 drive at the expo.

Billed as "the world’s only smart automatic video editing software," muvee autoProducer got a lot of looks at COMDEX.


muvee autoProducer boasts 24 editing styles, onto which you can select included music or add your own.


InstantCD/DVD 6 features include MPEG-1 compression, support for direct video capture from an installed video card and a "de-noise" tool to clean up audio tracks. And, using VOB’s InstantBackup, which features compression and encryption, users can back up large files to CD and DVD drives.