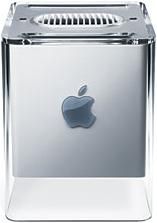 Sony expects Screenblast to appeal to both sophisticated users and new enthusiasts.

Access to Screenblast, along with an introductory level of Web-based editing tools and the 50MB showcase Web page will be free. An advanced set of tools, Screenblast Creation Suite, developed in partnership with Sonic Foundry, will sell for approximately $169, Levy said.

Apple Computer recently announced that it would stop manufacturing its Power Mac G4 Cube, less than a year after it was introduced. Despite winning design awards, poor Cube sales was blamed for the decision, after sales dropped from 9.5 percent of Apple’s computer sales last September to only 1.6 percent of its sales this March. The company has no immediate plans of upgrading the Cube.

The 8-inch, clear-plastic Cubes were pre-installed with videographer-friendly features such as iMovie 2 digital video-editing software, and two FireWire ports for easy digital camcorder connections. In February, Apple further equipped the Cube with a CD-RW drive and iTunes jukebox software.

Customers have been more apt to spend a little more and buy the Power Mac G4 mini-tower, according to an Apple spokeswoman.

AIST recently-announced an expansion of its MoviePack product line. MoviePack Video Edition 4.0, targeted at consumer and prosumer videographers seeking a high-performance and flexible editing solution, will offer editing, compositing, titling and animation in a single interface. It will also feature more than 200 effects and transitions, live previews in real time and an unlimited number of video and audio tracks. MoviePack 4.0 is scheduled for an August release at a street price of $399.

AIST’s entire MoviePack 4.0 line, which will include Pro ($699) and Extreme ($999), will integrate new features such as an improved storyboard view, batch capturing, automatic scene detection, improved timeline features and an ability to link projects to Microsoft Word, Excel or PowerPoint.

Watch for a more in-depth MoviePack look in upcoming issue of Videomaker.

The DVD+RW Alliance, a voluntary group of major PC and electronic manufacturers striving to develop and promote a universally-compatible rewriteable DVD format, recently received a major announcement from one of its founding members and also took in a prominent new member.

Dell Computers, one of the world’s largest computer companies, said it was joining the Alliance.

Other major companies in the DVD+RW Alliance include Mitsubishi, Ricoh, Sony, Thomson Multimedia, Yamaha and Philips. A Philips DVD+RW video recorder is also slated for a September release.