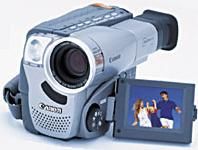 After Effects 5.0 run on Windows 98, 2000, ME and Mac OS9 and OS X Classic. The standard version will retail for $649 and the production bundle $1,499. Upgrade options will be available for current AE users.

Canon Announces New Hi8 Camcorder Line
The Canon ES8200V Hi8 camcorder is one of four new Hi8s recently announced by Canon. According to Canon, the new Hi8 models will come with features found on high-end camcorders, and offer the most value for the money.

The ES8200V will include a lengthy 22x optical zoom lens, electronic image stabilization and a 2.5-inch color LCD viewscreen. It will have six auto exposure modes, including Canon’s FlexiZone auto focus and exposure feature, nine digital effects and the ability to record still images.

Other features include a built-in video light, a high-capacity lithium-ion battery and an in-camera battery charging function. The ES8200V is slated to ship in May with a suggested retail price of $449.

Mac Attack
The RTMac from Matrox is a PCI video card for real-time digital video editing on the Macintosh. Available this spring for an expected $995 retail, the RTMac is integrated with Apple’s Final Cut Pro to provide the Power Mac G4 with real-time editing, effects and compositing. RTMac effects are powered by Matrox Flex 3D technology and include cross dissolves, wipes and keyframeable motion effects.

In addition to FireWire support, the Matrox RTMac features analog video capture and output capabilities. The RTMac will be able to provide support for two computer displays and playback realtime video on an NTSC (or PAL) monitor simultaneously.

Gretchen Cole, marketing director for Dell Precision Workstations said, "We expect this relationship to have substantial benefits for digital content creation professionals. Dell is the world’s leading supplier of branded workstation shipments and Avid is a recognized leader of sophisticated creative tools. This provides a powerful combination of high-performance, stable and reliable hardware with the advanced software tools this demanding customer group needs." The estimated retail price is $5,299.

Avid Xpress DV 1.5 allows users to deliver video content for Web streaming, CD, DVD and other media. The package will come bundled with Boris FX LTD and Boris Graffiti LTD. Also, a free upgrade to version 2.0 will be available to qualifying customers.