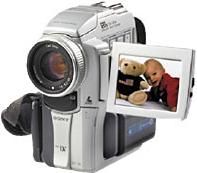 New Products Debuted at Comdex 2000
Over one million square feet of exhibitor floor space greeted the thousands who made the annual fall pilgrimage in November to Las Vegas for Comdex 2000. Videomaker editors scoured the show floors during the five-day event in search of the hottest and most innovative new video products.

Edirol Editing Appliance
Edirol was showing off its DV-7 DigitalCanvas, a hard drive-based video and audio editing appliance scheduled for release in the first quarter of this year at a suggested retail price of around $6,000.

It will come with a 60GB hard drive, keyboard, mouse and jog shuttle, T-bar controller and it will feature real-time transitions and special effects.

The DV-7 will support both storyboard and timeline editing, allowing users to switch freely between the two.

For audio editing, the DV-7’s mixer function enables real-time control of the volume of three stereo tracks, reverb and equalization.

New Sony Handycam
At the Sony booth the DCR-PC110 Digital Handycam was unveiled. Sony says the Mini DV camcorder is the first to integrate both Mega-pixel imaging and MPEG Movie mode.

A convenient MPEG conversion allows up to sixty seconds of video to be converted to an MPEG-1 movie. And through the DCR-PC110’s audio and video input, video can be imported from an external source and converted to MPEG. The video or still images can then be saved to the Memory Stick digital memory card.

Digital stills can deliver up to 1152 x 864 pixels. Other still image features include pop-up flash and red-eye reduction.

It will retail for about $2,000 and is scheduled for release in the first quarter of this year.

What a Blast!
Creative Labs showed its Video Blaster MovieMaker external capture device that connects to a computer by way of the USB port. It converts analog video and audio to MPEG-2 for recording to the computer’s hard drive. It comes bundled with Ulead’s Media Studio video editing software and will retail for $200

Canon Develops 3D Zoom Lens
Canon has announced the development of an interchangeable compact zoom lens for the XL1 camcorder that will enable the recording of three-dimensional images.

According to Canon, their newly developed zoom lens resolves the problems that conventional 3-D lens attachments have with loss of light and inaccurate left and right optical axes.

The lens will feature a 3x zoom, compact design and ease of use enabling even novice users to easily record 3-D images. There is no announced delivery date or pricing for the new lens.

POPcast Partners with MGI
POPcast Communications joined with MGI Software to provide users of VideoWave 4 the ability to publish their videos and productions to the Web.

Users of share.videowave.com will have access to free basic services and premium advanced services.

MGI provides access to online video sharing as part of the video sharing workflow in VideoWave 4 and POPcast is providing management, hosting and on-demand streaming of the posted video content.

Ihor Petelycky, general manager, video products for MGI says, "MGI continues to offer our users the latest in consumer video editing technologies and services by aligning with industry leaders such as POPcast. Demand for these services is growing, and we are excited to be able to offer our users a consistent, secure and reliable personal broadcasting service through POPcast."