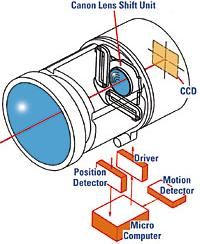 Canon U.S.A. has announced the introduction of their new DV Camcorder, the Vistura. The new camcorder incorporates an optical zoom of 16x which, according to Canon, is the worlds longest integrated zoom lens on any DV camcorder available for sale today.

In addition, the Vistura is the first camcorder that uses Canon’s new Lens Shift method of Optical Image Stabilization. The Vistura can capture both high-resolution video and digital stills, and records to a standard Mini-DV cassette, according to a Canon spokesperson. Other features on the camcorder include the FlexiZone AF/AE Image Control for precise focusing and exposure, and an auto editing function. In addition, the camcorder incorporates composite and S-video out terminals. The Vistura includes a FireWireTM connector for transferring video and stills to a DV-compatible computer.

The development of the Lens Shift optical image stabilization system relates directly to the size of the camcorder. The Vistura weighs 1 lb. 9-3/8 oz. and measures 3 7/8″ (H) x 2 7/8″ (W) x 5 3/4″ (D). Optical Image Stabilization utilized in some camcorders is based on the Vari-Angle Prism technology (VAP). VAP incorporates two glass elements that are connected by moveable bellows and filled with a silicon-based liquid. The system optically redirects light before it reaches the image sensor, or CCD, to compensate for camcorder shake. This method of image stabilization is recognized industry wide as more effective than electronic methods of stabilization. Because of the size of the Vari-Angle Prism however, the general dimensions of a camcorder incorporating this technology is larger then camcorders that use electronic image sensors. Canon maintains that the new lens shift method blends the smaller sized camcorder with outstanding image quality. According to a Canon press release, this is how the mechanism works, “it is composed of one group of lenses, including a precisely manufactured aspherical element, encircled by a fastener, and integrated within the structure of a zoom lens. Positioned between the zooming and the focusing groups, the lens shift group, working in concert with a tiny shake detector, a group position detector, microcomputer and actuator, can be shifted horizontally and vertically to the axis of the lens, with remarkable speed and accuracy”.

The Vistura is currently available for purchase and carries a suggested retail price of $1,999

With the first have of the year now accounted for, overall video sales are headed for a banner year with total sales up 9 percent to 21.1 million units for the year as of August 1st. According to a couple of industry sources, all video categories are performing at record first-half sales prices with Digital camcorders being the fastest growing segment of the market. The latest data released from the Consumer Electronics Manufacturers Association (CEMA), states that the only area not showing record growth is the sale of television sets. They show an increase of 10 percent over the first two quarters of last year with big screen TVs enjoying a 13 percent increase. The CEMA report states that TV/VCR combination sales rose 25 percent and VCR sales rose 4 percent over the same period last year. Camcorder sales recorded a 10 percent growth compared to last year’s figures with nearly 1.9 million units sold.

In a separate survey conducted by Strategy Analytics, a technology-marketing consultant, figures show that Digital camcorders are the fasted growing segment of the home video market. This is attributed to falling prices, high picture quality and the ability to edit videos on the home computer. According to Strategy Analytics, sales of digital videocassette camcorders in Europe, Japan and the U.S. would hit 2 million units by the end of 1998 compared to 1.4 million units in 1997.