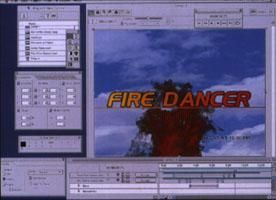 Videonics Inc. has announced that it is shipping the production version of its Effetto Pronto Digital Effects and Compositing System for the Macintosh [TM] platform. Effetto Pronto, which means "fast effects" in Italian, features a desktop based hardware and software compositing tool that offers real-time effects processing and unlimited layering capabilities. Effetto Pronto includes a dedicated PCI effects processing engine and can be integrated into any Power Macintosh [TM] QuickTime-based nonlinear editing system, according to Videonics.

Effetto Pronto features pipeline architecture that allows the operator to work with an unlimited number of tracks, at any resolution. It will also mix and match a variety of acquisition formats. Other features consist of a software application called a Composition Editor which is a keyframe-based, time-line compositing interface which integrates different production sources such as; QuickTime video, graphics and text from the built-in titler. Videonics has made it convenient for the operator to manipulate the screen image by using features menu that is located in either the Composition Editor window or with floating Parameter Palettes. The suggested retail price of Effetto Pronto is $5000.
For more information contact the Videonics Web site at www.videonics.com. or call their product information phone number at (800) 338-3348.

There is good news for video enthusiasts who long for professional-looking video on a personal computer. Avid Technology Inc. and Matrox Graphics Inc. have announced an agreement that will offer a Windows [R]- based desktop video editing solution for PC users. The Matrox Marvel G2000-TV and the Marvel G200 graphics and video hardware, will be combined with the Avid Cinema [TM] Windows video editing software. "This solution will allow users with an affordable, easy to use way to create professional-looking movies on a personal computer." according to a spokesperson for both companies.

According to a press release from Avid, full motion video, still images, audio and graphics can be captured from a VCR, camcorder, TV or Website using the Cinema’s nonlinear editing capabilities. This will allow for high-quality movies to be distributed to a variety of media which include; Web TV and VHS tape in addition to QuickTime or AVI movies.

The Matrox G2000-TV will be jointly marketed by Avid and Matrox and will be sold through Matrox’s sales channels. The Marvel G2000 and the Avid Cinema software will retail for a suggested price of $329.

Sony Electronics’ i.LINK interface standard (based on the IEEE-1394 standard) has been adopted by 16 manufacturers throughout Europe, Japan and the United States. Sony products with i.LINK include the DSR-PDI handheld camcorder, the DSR-200A switchable aspect ratio ½ CCD camcorder, the DSR-V10 DVCAM[TM] video Walkman[TM] player/recorder, the DSR-20 ½ rack VTR, the DSR-70 Laptop video editing system and all consumer DV camcorders and VCRs as well as many third party PC based products.

The i.LINK interface gives users the ability to digitally link between DVCAM [TM] video equipment to the computer for desktop editing applications. It allows for a complete digital connection and eliminates the need for separate video, audio and control connectors while improving the video and audio quality.

Originally developed by Apple Computer as a computer interface, the IEEE-1394 standard and the FireWire connector have been embraced by the video industry because of the volume of digital video information that can be transmitted through FireWire’s large amount of bandwidth. This feature makes it perfect for nonlinear editing. Other video manufacturers presently incorporating IEEE-1394 technology are JVC and Panasonic in their line of DV camcorders and DraCo in the Casablanca nonlinear editing system as well as Pinnacle in their Miro DV300.