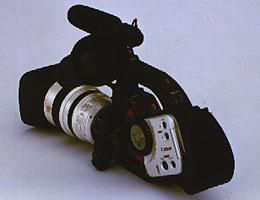 
Matsushita, the parent corporation of
Panasonic, plans to discontinue production of the company’s VHS and S-VHS
camcorders by the middle of this year. According to Bill Mannion, General
Manager of the Panasonic Consumer Video Division, "Our full size camcorder
models will continue to be available at retail for several months, but we
will no longer be producing full size VHS for the consumer market (i.e.
PV-700 series, PV-S770) after April, 1998."


The FireWire (IEEE 1394) digital interface may be a boon for consumer
video producers but it’s causing big headaches for major film studios and
software makers. They fear that, without a copy protection system, consumers
will use their DV camcorders, VCRs and computers to pirate video and software
programs. Thus, we still await the introduction of a consumer DV editing
VCR.

In February, a consortium of five consumer electronics and PC manufacturers
made some progress on a copy protection system for digital video products.
Intel, Hitachi, Toshiba Matsushita and Sony proposed that information transmitted
by FireWire be "authenticated" and coded before being "accepted"
by a device such as a VCR or computer.

A multi-industry task force, the Copyright Protection Technical Working
Group, will choose the final standard from among three proposals.


Castlewood Systems is close to bringing a removable hard drive to market
which uses magnetoresistive (MR) head technology. The company was founded
by Syed Iftikar, the founder of SyQuest Technology and co-founder of Seagate
Technology, where he invented the first 5.25-inch hard drive.

Castlewood has created ORB, a removable media hard drive that uses 3.5-inch
disks. Dubbed M-DVD (magnetic digital versatile disc), the disks will hold
2.16 gigabytes of data. Although other removable media, such as Iomega’s
Jaz 2 can hold 2GB, Castlewood’s MR technology allows users to record 133
minutes of M-JPEG-compressed video at S-VHS resolution (400 horizontal lines).
It can do this because of its fast data transfer rate–12.2 megabytes per
second.

Castlewood will provide four versions of ORB: internal EIDE, external parallel
port, internal SCSI and external SCSI. Various configurations are compatible
with different operating systems, including DOS, Windows 3.X/95/NT and Macintosh.
Retail packages, including one disk, have a suggested retail price of $199.95;
single ORBit disks list for $29.95 each. Sanyo and Thomson Consumer Electronics
are among the manufacturers developing digital VCRs for use with ORBit disks.


After some users who received early shipments of XL1 DV camcorders discovered
a pattern of vertical lines on recorded images, Canon’s Video Division worked
overtime to investigate and correct the problem. Videomaker tested
a pre-production model of the XL1 (Benchmarks, March 1998) in which the
problem did not appear. Here is Canon’s official statement about the picture
quality problem:

Canon’s research and development center has investigated this issue and
has determined that the vertical lines are caused by noise interference
generated by internal components of the XL1 camcorder. The amount of noise
depends on the camcorder’s settings, lighting conditions and the content
of the image being recorded.

Since Canon remains committed to providing the highest level of customer
satisfaction, if any current XL1 owners have these vertical lines and find
the amount of noise objectionable–Canon will correct the situation.

XL1 owners who purchased units prior to the corrective action can have the
noise reduction component installed at no cost. Contact Canon at (800) 828-4040
or send e-mail to video_tech_support@cusa.canon.com
Video Division


Videonics product manager Steve Siacotos announced that the MXPro’s
introduction has been postponed until the second quarter of 1998. During
"alpha testing" (initial troubleshooting) the company discovered
that the MXPro would not meet Videonics’ quality specifications in time
for its announced end-of-1997 shipment date. DV upgrade information will
be announced after the MXPro begins shipping.