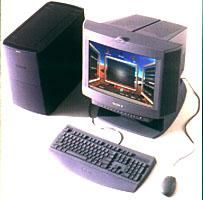 With over 1800 exhibitors and more than 100,000 attendees, this year’s Winter
CES (Consumer Electronics Show) descended on Las Vegas from January 8th
to January 12th, leaving a trail of new camcorders and video devices in
its wake.

Panasonic debuted two VHS-C camcorders with digital photography capabilities
at CES this year: the PV-L858 ($999.95) and PV-L958 ($1099.95). Both units
have the ability to download still images to a computer through an RS-232C
connection. Both also feature flip-out 3.2" LCD monitors and "super-stretch"
timelapse recording, for up to six hours on a 40-minute compact VHS tape.

Another entrant in the dual-camcorder market is JVC‘s DualCam. The
GR-AXM700 is a VHS-C camcorder with an integrated digital flash memory that
holds up to 44 standard mode still shots. The DualCam features a 3-inch
LCD flip-out monitor, camcorder-to-PC connectors, Picture Navigator software
and JVC’s proprietary Random Assemble Editing. It lists for $999.95.

JVC announced its first DV camcorder, the GR-DVL9000 ($2799.95), to feature
a FireWire (IEEE 1394) jack, in addition to its proprietary JLIP terminal
for pure digital output. The DVL9000 sports a 1/3" progressive scan
CCD, 4-inch LCD monitor, an f/1.2 lens and 200x Super Digital Zoom. Both
camcorders will be available in April.

Sharp touted its new line of Slimcams–the world’s thinnest camcorders,
according to the company. A Mini DV model, the VL-PD1U ($2999.95), features
a unique 4-inch, flip-out LCD monitor with touch-screen commands. To zoom
in on an area, simply press that section of the image on the monitor. The
touch-screen zoom function also works during playback.

Another new 8mm camcorder sports dual lenses for picture-in-picture recording
of wide-angle and telephoto images. The Twincam (VL-SW50U) lists for $999.99
and will be available in May.

Hitachi‘s MPEG camera, the new digital camcorder that records MPEG
video and JPEG still images directly onto a hard drive instead of tape,
received an Innovations ’98 award at this year’s show.

Those who were expecting to see a big red-carpet rollout of Apple‘s
Quicktime 3.0 at this CES were disappointed. Though the newest version of
this industry-standard digital video software format was the subject of
much conversation on the show floor, the software itself was only available
as a developer’s preview at the time of the show. Quicktime 3.0’s big promise,
as elucidated by Steve Jobs in a recent press conference, is the ability
to handle video, audio, animation and 3D content compressed with virtually
any codec (compression/decompression scheme) available on the market today.

Sony Introduces a PC for Video


For those videophiles who cringe at the idea of messing around inside
their computers to install capture cards, manufacturers are bringing video-ready
PCs to market. Sony’s latest version of its VAIO line, the PCV-240 Multimedia/Video
PC, offers enough video editing hardware and software to please hobbyist
videographers.

Composite and S-video in/out jacks (including front inputs), MPEG1 capture
card, Asymetrix Digital Video Producer and Macromedia Shockwave editing
software, 6.4 GB hard drive, internal Zip drive and a TV tuner are some
of the features on the 300MHz Pentium II MMX computer. List price is $2999.99
for the computer, keyboard and cables; a monitor is not included.


Last year, Warren Publishing conducted a survey of the camcorder market
and concluded that among all the consumer formats, DV camcorders have not
yet made much of a dent in the total U.S. market share. Unlike Japan, in
which the Mini DV format has captured 55% of the consumer camcorder market,
only 1-2% of U.S. purchasers have picked up digital units. Two reasons for
the difference may be that, in Japan, there is a very small price contrast
between DV and Hi8 formats, and all DV camcorders now have a FireWire link
to PCs and some VCRs. In the U.S., by contrast, there is a deep price difference
between the two formats and manufacturers and production studios continue
to litigate copyright protection issues, thereby forestalling the digital
dubbing feature. Three top-selling brands–Sony, Panasonic and JVC–continue
to dominate the camcorder market.