The beginning of the calendar year means taking down the holiday decorations, making goals and resolutions, and the annual pilgrimage to the Consumer Electronics Show. We just got back from the 2008 show, held January 7-10 in Las Vegas, Nevada and offer you a look at a few products that caught our eye.

Canon was on the show floor with both standard- and high-definition camcorders. Many of the models include Canon’s Advanced Zoom function that utilizes the camcorder’s image processor to achieve a long effective zoom ratio with near-optical zoom quality.

Panasonic has entered the waterproof camcorder fray with the SDR-SW20 ($400), which can operate in water as deep as 5 feet and can survive drops from as high as 4 feet. The SDHC camcorder includes a 10x optical zoom and 2.7″ widescreen LCD, and can be connected directly to Panasonic’s optional DVD burner for one-button burns. The SDR-S7 forgoes the water- and shock-resistance, but can be had for $300.

The HDC-SD9 ($800) is a full-HD SDHC 3CCD AVCHD camcorder with optical image stabilization, Leica Dicomar glass, face detection, and a shooting guide that alerts the user when the camcorder is tilted, when the user’s hand is tilted or swinging, when the camcorder is being panned too quickly, or when the subject is backlit or the lighting is too low. The HDC-HS9 ($1,100) adds a 60GB hard drive.

Samsung’s SC-HMX20C (price not available at press time) SDHC camcorder with 8GB internal flash memory records in full HD and in 1080p at 30fps. The camcorder includes a 6.4-megapixel CMOS sensor and can record at 300fps for up to 10 seconds.

Sanyo’s HD700 ($600) 720p SDHC camcorder includes a 7.1-megapixel CCD and is available in silver, red and brown. It includes face detection, 5x optical zoom, a 2.7″ widescreen LCD, ships with Adobe Premiere Elements 3.0 for Windows and works with iMovie 08. The HD1000 ($800) upgrades to full HD and a 10x optical zoom, and is bundled with Nero 7 Essentials and Ulead DVD MovieFactory 5 SE. 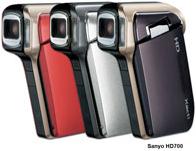 Other Gear That Caught our Eyes
Sennheiser 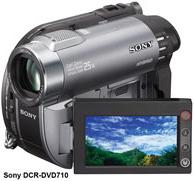 Sennheiser announced the MX W1 set of fully wireless headphones, available in May 2008. Using a wireless technology developed by Kleer Corporation allows the full audio bandwidth that you would get in a wired headphone set. The transmitter is about the size of a matchbox, and there are two bud style ear-pieces that can be recharged up to three times from the battery in the carrying case so you don’t have to scramble to find a plug in the field. Another useful feature is the ability two use two sets of ear pieces with the same transmitter simultaneously, allowing the director and the soundman to both hear the camera audio at the same time. 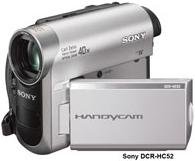 Casio wowed the crowds with its new still photo camera the EX-F1 (price unavailable). Aside from the digital camera aspects, it appears to be a highly capable high definition video camera as well. The video taken from one of the prototypes proved very impressive. This model incorporates a high speed CMOS sensor and a high speed LSI processor. With this model, Casio has achieved an ultra-high speed 60 frames per second (fps) burst rate for still images, together with 1,200 fps high speed movie recording that captures movement faster than the eye can see for ultra-slow motion replay. Moreover, the new model can record movies at full High-Definition. Users can record movies at a screen size of 1920 x 1080 pixels, at a rate of 60 fields per second. To be released this spring.

Western Digital managed to pack a whopping 320 Gigabytes of storage into it’s new Passport Portable Drive 320 ($229.99). The same pocket sized form factor, bus powered, and simple USB connectivity as before but this sharp increase in storage capacity puts almost a third of a terabyte of digital storage in the palm of your hand.

A trade show like CES is a fun yet tiring event to attend: so much to see, so little time to see it all!

We met with HP, Netgear, and a host of other companies, including Pinnacle, who showed off the new free download “VideoSpin”; and Nero, with its latest Nero Ultra 8 edition.

Both softwares combine multiple uses, and you can see all of our video reviews at videomaker.com/video-news/category/ces/ for video stories from the show floor, and watch for reviews on some of these products coming as soon as we can wrangle them from the manufacturers hands!