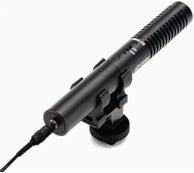 Azden makes a lot of microphones well suited for the video hobbyist, because they’re generally less expensive than the competition and, when it comes down to it, they get the job done. The new SMX-10 falls right into that category, going for $100 and featuring a 100Hz to 18kHz frequency response with a -40dB sensitivity. One slightly strange feature is the built-in roll-off at 200Hz that unfortunately can’t be switched off. For most shooters trying to capture dialog, this is ideal, but for capturing sound effects and other ambient sounds, the bass tones might add a lot more depth to your audio, even though you might end up rolling them off in post. Yes, we’re being a little too critical here, as most mics do have some sort of roll-off filter. However, we think giving hobbyists more control is a good thing. In the end, the SMX-10 (equipped with a 1/8″ audio jack) is a great step forward for anyone still using an onboard mic. Keep away from those darn onboard microphones — they’re nothing but trouble. www.azdencorp.com 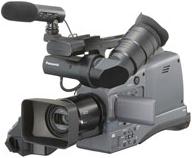 Shoulder-mount camcorders give you two notable benefits: authority and stability. Other than that, for most semi-pro shooters, they’re just the big brothers to their handheld-sized counterparts. The Panasonic AG-HMC70 AVCHD camcorder appears to be just that, a big brother of the AG-HSC1 (reviewed in the October 2007 issue of Videomaker). It has basically the same components under the hood, but adds more audio features, a professional viewfinder and a 12x optical zoom. The new AG-HMC70 records 1080i AVCHD to SD or SDHC memory cards, allowing up to 160 minutes of recording time at its highest quality (16Mbps) on a 16GB SDHC card. Those additional audio features include XLR Mic/Line switchable inputs with attenuation, 48V phantom power and manual control over your record levels – just what a pro videographer needs. A price has not yet been set. Expect to see the Panasonic AG-HMC70 shipped in April. 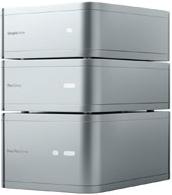 Fabrik announced its new professional hard drive line that adds an online, off-site back-up feature. The online back-up component isn’t really a new technology, but it’s the first time we’ve seen it matched with hardware, and with a price point that’s approachable for professionals and consumers. Fabrik has a software solution that allows you to back up your data to the new hard drive line itself (locally), as well as use its online data service ” called Fabrik Ultimate Backup ” to back up your data to a secure, off-site data center. There are actually two services here: a free one with a 2GB storage capacity (which is actually available to the general public) and an unlimited storage capacity that runs just $4.95 a month. What this means is that should anything happen to your drive (say, damage, failure, theft or anything else resulting in the loss of your data), Fabrik will have a copy of it. The new hard drive line consists of three different models: Simple Drive, Pro Drive (adds eSATA) and Duo Pro Drive (adds eSATA and RAID performance). Hard drive capacities range from 250GB to 2TB, depending on the model, with pricing starting at $100. Check out the Fabrik Web site for more details: www.fabrik.com .

Looks are everything when it comes to finishing your video. If it looks good, it is good. Well- you audiophiles know better than that. Anyhow, Red Giant Software has given the Magic Bullet filter set a makeover, and now we can simply call it Magic Bullet Looks. This update refines the user interface and increases its usability between different editing platforms, meaning that the custom filters you create can be shared with other editors who use different editing software. This will certainly score you some high-fives with your editing buddies. You can upgrade your existing Magic Bullet Look Suite for $99 or jump in head-first for $399. www.redgiantsoftware.com.