Now that we’ve arrived back from the 40th Annual Consumer Electronics Show (held Jan. 8-11, 2007 in Las Vegas, NV), we’ve had a chance to compile all of the camcorder announcements we saw over the course of the show. The trends we’re noticing are:

In what might be a sign of future developments, there were not nearly as many new Mini DV camcorders announced at this year’s show as in the past. Those that were announced were at some of the lowest prices we’ve ever seen. 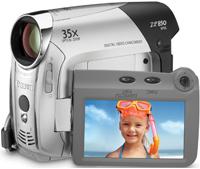 Canon’s Mini DV line gains the ZR800 ($279) which includes a microphone jack and a 35x optical zoom lens. The Canon ZR830 ($299) and ZR850 ($329) forgo the mic jack, but add a Quick Start mode that allows them to start recording from a standby state in less than one second. The ZR850 also adds a built-in video light and upgrades to a 1.07-megapixel CCD. All include a 2.7″ widescreen LCD viewscreen.

The DVD-burning DC50 ($799) utilizes a 5.39-megapixel CCD and includes optical image stabilization for its 10x optical zoom lens. It also includes a built-in video light and a widescreen LCD. The camcorder is bundled with a version of Roxio MyDVD as well. 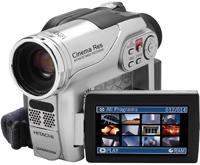 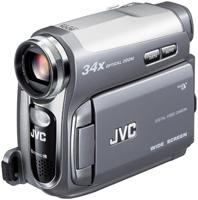 JVC’s Mini DV camcorder line includes 680k-pixel CCDs, 34x optical zoom lenses and 2.7″ widescreen LCDs. A video light is present on all models that can automatically activate as needed. The GR-D750 ($250) is the baseline model, while the GR-D770 ($280) adds an SD card slot and the ability to shoot still images while video is being recorded. The GR-D796 ($350) additionally ships with two batteries, each holding enough charge to shoot for a claimed 135 minutes.

JVC’s Everio GZ-HD7 3-CCD camcorder with 60GB hard drive ($1,800) is the first consumer camcorder able to record full 1920x1080i images, and is also the first consumer-level camcorder that utilizes an f/1.8 Fujinon lens with 10x optical zoom. Its 1/5″ 16:9 CCDs operate in the progressive domain, and each have 570k pixels (effective: 530k pixels). The camcorder can record up to five hours of full 1080i MPEG-2 footage at 30Mbps. Footage can be burned directly to Blu-ray Discs with the provided software, or transferred over the camcorder’s USB 2.0, HDMI or FireWire connections. 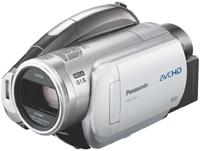 Panasonic showed off its first AVCHD camcorders at CES, the HDC-SD1 ($1,500) and HDC-DX1 ($1,400). Both are 3-CCD designs that include Leica lenses and optical image stabilization. The HDC-SD1 can record for approximately one hour of HD onto a 4GB SDHC card, and the HDC-DX1 can record about 40 minutes of HD onto a dual-layer DVD-R. The camcorders include five discrete microphones for 5.1-channel recording.

Sanyo’s VPC-HD2 records 720p video in MPEG-4 at 9Mbps, and utilizes a 7.21-megapixel CCD and 10x optical zoom lens. It includes some in-camera editing functionality, and its docking station includes an HDMI interface. The camcorder can record to either SD or SDHC cards, and also includes an SD recording mode tailored for use with portable media players. A 2.2″ LCD viewscreen rounds out the list of features. 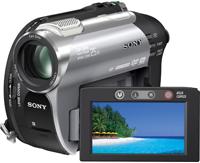 Mini DV is not forgotten, with the DCR-HC28 ($280), DCR-HC38 ($330) and DCR-HC48 ($400). The DCR-HC28 is the baseline, but still offers Carl Zeiss optics. Sony is touting the battery life of their new camcorders – with the optional FH100 battery, the HC28 is able to shoot for up to 14 hours. The HC38 includes a 40x optical zoom lens and adds an on-screen usage guide. The HC48 uses a 25x optical zoom lens, adds a wide LCD screen and ships with the Handycam Station, allowing you to maintain a connection with a TV, computer or printer.

Sony completes its offerings with a line of hard drive camcorders, the DCR-SR42 ($600), DCR-SR62 ($650), DCR-SR82 ($750), DCR-SR200 ($850) and DCR-SR300 ($1,000). All ship with DVD authoring software and a Handycam Station which additionally connects to Sony’s DVDirect DVD burner. The DCR-SR42 includes a 40x optical zoom and 30GB hard drive. The DCR-SR62 adds a 2.7″ widescreen touchscreen LCD. The DCR-SR82 upgrades to a 60GB hard drive. The DCR-SR200 backs down to a 40GB hard dive, but adds Dolby Digital 5.1-channel recording with Bluetooth mic support. The SR300 upgrades to 4/6-megapixel stills and adds optical image stabilization and the ability to record up to three seconds of 240fps video for further slow-motion analysis.