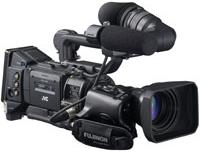 The JVC professional line of HDV camcorders embraces all things progressive with its native progressive scan imagers, allowing independent producers to reach new heights. But, now, with the new GY-HD200, JVC has managed to push the envelope further with its 720/60p format. Shooters can acquire video at 60 progressive frames per second, capturing clearer high-speed action, or slowing it down on a 24p timeline to make super-smooth slow-motion. This 60p feature has many independent filmmakers licking their chops.

The Steering Committee for the DVD forum approved HD DVD playback and recording using red lasers on typical DVD recording media (4.7GB). What?! Yes, you can now playback and record HD DVD content on standard DVD-R (4.7GB) media. We reported this initially on our blog when Pinnacle showed us its HD DVD Authoring Pack that allows you to do just that. The results were stunning. You can expect other vendors to offer similar software packages, as well as some camcorder manufactures utilizing this in a new form of HD DVD camcorders.

For a long time we thought compression suites were dead. But, the rise of Internet video and the looming HD optical disc dilemma (i.e., the HD DVD vs Blu-ray format war) has brought back the need for a complete solution. That’s where Sorenson Squeeze 4.5 comes in with, reportedly, 3x faster performance. It includes new presets for compressing video for HD DVD and Blu-ray, up or down scaling for HD or SD video, and works on PCs and both PowerPC and Intel Macs. Oh, and it’s still one of the best Flash video encoders on the market.