HD for JVC
on the Horizon

Rumors of an high-def Everio have been the hot topic among our water cooler. Recently, details have emerged from the they-always-get-it-first-in-Japan camcorder market. The unofficial news is that this new camcorder will have three 1/5″ CCDs, a Fujinon lens and a 30GB hard drive. More importantly, there’s speculation that this camcorder will record 1080p to disk, but output just short of that crystal sharp progressive scan at 1080i. This raises hopes that shooters might be able to transfer their footage from the camcorder’s hard drive to their computer’s hard drive and preserve the 1080p video. If so, it will be the first consumer camcorder to do so. The JVC HD Everio has yet to receive a model name, but is expected to roll out in the US sometime in 2007.

Samson recently released a mobile field audio recorder that will help videographers free up some of the limitations of using their camcorder as the audio recording device. The H4 is packed full of features that enable you or your sound recordist to capture four channels of audio on a system that’s relatively small and operates on two AA batteries (up to 4 continuous hours). It has two 1/4″ XLR inputs with phantom power, up to 24-bit/96kHz or 320kbps MP3 audio recording, USB connection, SD memory card slot, 1/8″ headphone jack and a slick looking, back-lit LCD.

This also looks like it could be a great solution for those low-budget independent productions, wedding videography or recording your own podcast. It’s going around $299 on the street and you better get yours fast. The product manager for Samson reports that they’re already running low on stock.

CES is Coming to Town 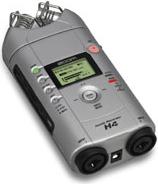 With the Consumer Electronic Show (CES) nearing, we’re gearing up and getting ready to make our feet sore trekking hundreds of show booths. If you don’t know, CES is usually the biggest event for consumer level video camcorders. Most camcorder manufacturers announce their new camcorder lines and products at this show. We plan on having unprecedented coverage of the event using a triple threat of our Blog, Vidcast and Magazine.

Notable updates from CES are a keynote from Bill Gates (you know, that Microsoft guy), Robert Iger (CEO, Walt Disney), Michael Dell (CEO, Dell) and Ed Zander (CEO, Motorola). And, of course, I’ll be there, Mark Montgomery (CEO of absolutely nothing). Hope to see you there.

We shoot a Videomaker Presents vidcast every week and we’ve received great feedback from you, our readers and viewers. As a result, we are now offering you more and more tips and tricks to enhance your video producing enjoyment. You’ll find lots of ways to learn and grow from some of the Videomaker editors’ favorite tricks with Tips & Techniques, to Take 20, the segment that gives video critiques from our Videomaker community, to the latest News & Technology and Matt’s thoughts on the future of the industry in his vidcast Viewfinder.

Here’s a sample of a few of our recent episodes:

Episode 28 We investigate a fun camcorder modification in our News & Technology segment, and continue our look at tripod tricks in Tips & Techniques.

Episode 29 looks at notebook battery recalls, and in Take 20, we critique a video spoof on the spy genre that has a funny twist on mistaken identify called “Climax,” by producer Devin Doyle.

Episode 31in part one of two, we explain the uses of color bars in Tips & Techniques. Brian then joins Matt in the Viewfinder segment discussing documentary videography and its growing interest among our audience.

Episode 32 We look at Adobe’s latest release of its popular “Elements” editing software in News & Technology segment along with an inside look at Serious Magic’s powerful software, DV Rack, in our Tips & Techniques segment.

Episode 33 In our News & Technology segment, we explore Blip.tv’s partnering with Akimbo to bring internet video sharing to your TV and in Matt’s Viewfinder, he and Derek give you a behind the scenes look at how we produce our vidcasts.