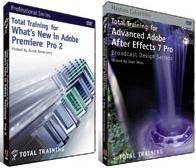 Total Training Premiere Pro 2 and After Effects 7 Pro
The day after the two new video production bundles were announced by Adobe, Total Training came out with two DVDs to help editors use the new and improved tools: Advanced Adobe After Effects 7 Pro: Broadcast Design Secrets and What's New in Adobe Premiere Pro 2. As their name implies, these are not complete, comprehensive 20 hours or so training DVD's but shorter 4.5 hour (Premiere) and 6 hour (After Effects) instructional discs presented by industry professionals. The Premiere Pro 2 series, $80, hosted by Dust to Glory's editor Jacob Rosenberg, is aimed at beginners through advanced users and covers color correction, multi-cam workflow and HDV issues. The multiple Emmy award-winning Dean Velez hosts the After Effects 7 Pro series, which sells for $150, and is recommended for intermediate to advanced editors. The disc covers creating sophisticated backgrounds, particle effects and a complete walkthrough of a broadcast design workflow. Course outlines, sample videos and product reviews can be found at Total Training's Web site:

25GB Burner on Its Way

In fact, Pioneer Electronics' BDR-101A might actually be on sale as you read this. Due out the first quarter of 2006, this internal Blu-ray burner is expected to be the first of its kind available to consumers, though Pioneer explains it is targeted primarily to professional users and serious enthusiasts, or those who need or want the challenges that come with early adopted equipment.

Utilizing shorter wavelength blue lasers, these writers will be able to burn the following media: BD-R/RE (2x), DVD-R/+R (8x) and DVD-RW/+RW (4x). It will also read BD-ROM/R/RE, DVD-ROM/DVD-R/DVD-RW and +R/+RW.

First there was the $100 hand crank laptop (though inventor MIT Media Lab says these will not be available for sale: http://laptop.media.mit.edu). Now there is the $100 camcorder (street price should be lower). Hard to believe but true. The manufacturer, Mustek, takes advantage of an inexpensive CMOS sensor and flash memory to provide this hockey puck-sized camcorder for less than a C-note. But before you run out and drop a Ben Franklin on this pocket wonder, there are a few things you should know. For one, at 30 frames per second, you will only get video at 320×240 pixels, which is not bad if you know for sure it is only going to the web. At 25 fps you'll get 400×304 pixels and at 10 fps you'll get full 640×480 resolution. Plus, the internal memory is only 32MB, though the unit does accept SD/MMC memory cards. The MPEG-4 (ASF) camera has a 4x digital zoom, a 1.5" TFT LCD display, built-in mic, a speaker and earphone jack. It has USB and A/V out and uses 2 AA batteries. If that's not enough, the Mustek DV 8200 is an 8 megapixel still camera, digital voice recorder (WAV), an MP3 Player and a card reader.