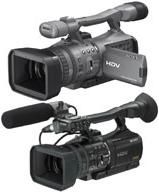 Sony recently announced two new HDV camcorders; the successor to the popular HDR-FX1; the HDR-FX7 and the pro version, the HVR-V1U. While both look similar from the outside and share many key features, the FX7 is smaller and lighter that the V1U. The most notable new shared feature is the use of three 1/4" CMOS sensors (Gross: 1.12M pixels, Effective: 1.04M pixels). This is a first. Among other advantages, CMOS sensors require less power so battery life is significantly extended.

Other key shared features include:

The HDR-FX7 ships in late October. Shipping date for the HVR-V1U was unavailable at press time. 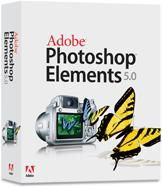 Two of the most popular sub-$100 editing solutions have just been overhauled and are both more powerful and easier than ever. Adobe rolled out Premiere Elements 3.0 and Photoshop Elements 5.0 on September 12, and our early tests have confirmed marketing claims of power and simplicity. The most obvious enhancements center around making it easier to share your videos; whether you need to distribute online or by DVD. In fact, with just a few clicks, you can go from capture to finalized DVD.

Some of the key new features in Premiere Elements are:

Photoshop Elements 5.0 also has many new capabilities such as auto grouping and auto suggested "Stacks." These Stacks are Photoshop's attempts at automatically recognizing and grouping similar images; a real potential timesaver. Also new in 5.0 are improvements to black and white conversion, control of color curves, and sharpening.

Both new versions will require a little more system horsepower no surprise there; and both require Microsoft Windows XP or Media Center Edition. So unless you need the flexibility of doing advanced editing, Premiere Elements 3.0 is worth a very close look.

Get on Board! Come see the Show! Videomaker Presents… 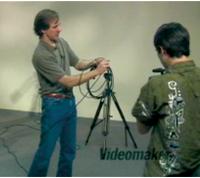 Episode 26: In News & Technology, we talk about Canon's XH-A1 and XH-G1, the two new HDV camcorders that will replace the GL2. Our Tips & Techniques segment looks at the "must have grip kit" no video producer should be without. And our Take 20 segment critiques Adaptation: Animal Behavior Conditioning, an underwater documentary by Chris Liles.

Episode 27: In News & Technology, we examine Canon’s announcement of a new high-definition and a new dual-layer DVD camcorder, while JVC and Verbatim are the first up with new dual-layer DVD-R media. Tips & Techniques unravels the mysteries of coiling cables and some tips for your "sticks," and in Take 20, we critique Buttercup: The Official Trailer by Justin Kontz. Matt York's Viewfinder segment looks at the metamorphosis of editing video.