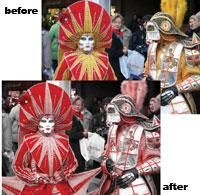 NewBlue has just added to your selection of plug-in effects filters. They're making 57 plug-ins for the "AudioFX" and "VideoFX" groupings. Each of the seven collections can be bought individually from its Web site, for between $49 and $89. Thoughtfully, NewBlueFX has made each of their products available for trial download. NewBlueFX are compatible with Sony Vegas, Adobe Premiere, Ulead Video Studio, Avid Liquid, and Pinnacle Studio. With these editors, you can use filters with names like Air Brush, Dream Glow and Robot Fog. One audio collection called Scrubbers features hum remover and noise reduction tools. Hummmmm.


Two electronics heavyweights have come together to form a new video format. It's called AVCHD for "Advanced Video Codec High Definition," and will allow more hi-def video to fit on your media. The new format uses MPEG-4 H.264 compression to fit HD onto 8cm discs. Currently there are plans to include AVCHD in consumer DVD camcorders, letting users record both 1080i and 720p. We think the sound quality will be top notch too, since you'll have the option to record uncompressed PCM audio like good ol' DV.

Apple's prosumer editing package has again seen updates. Final Cut Express HD 3.5 has been reworked to take advantage of the Intel processor-based machines, but also works on products with a PowerPC G4 or G5 processor. Apple calls this compatibility "Universal", but it's still only available for the Mac. If you have version 2.0 or earlier, this update seems especially worthwhile. FCE version 3.5 includes many more features than 2.0, and includes features found on its big brother, Final Cut Pro. Find expanded keyframing, Photoshop file import, and Dynamic RT for more real-time video playback in the new version. Each of the other bundled applications have received treatment; Soundtrack 1.5 and Livetype 2.1 both have new features and added compatibility. Soundtrack 1.5's multi-take recording sounds like a good option to have for voiceover or ADR (automated dialog replacement) work.