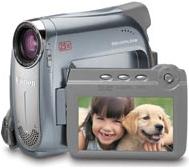 The 2006 Consumer Electronics Show took place January 5-8. This show is the absolute best place to see the latest and greatest in consumer electronics devices, and is the place to preview all of the cool electronic gadgets that might come out later this year.

This year marks the re-entry of two brand names to the camcorder fray after lengthy absences, and sees the trend of miniaturization continuing, along with the trend of optical zooms getting longer. Here’s a look at some of the highlights from this year's CES.

The Sanyo nameplate hasn't been fastened to a camcorder in the USA since the early 1990s, but it’s back in a big way with the Xacti HD1, an $800 camcorder that claims to be the world's first HD compact digital media camera. The 8.3-ounce (with battery and SD card) camcorder utilizes a 5.36-megapixel imager, and can record up to 42 minutes of 720p HD or 2 hours of standard-definition video on a 2GB SD card. The camcorder also includes a 10x optical zoom and a 2.2" organic LED viewscreen, and can also take 5.1-megapixel still images on the fly. The unit is slated to be available in late March.

Toshiba is also back after a lengthy absence from the camcorder arena with two hard drive camcorders. Dubbed gigashot, the video/still cameras will record MPEG-2 video onto Toshiba's own 0.85" and 1.8" hard drives. More details on these units will be available later in the year.

Canon has announced four new Mini DV camcorders; three new ZR-family and one new Elura-family. All of the new models include 2.7" high-resolution wide viewscreens and 25x optical zoom lenses with three fixed zoom speeds. The ZR500 will retail for $299, the ZR600 for $349 and the ZR700 and Elura 100 for $399 each.

Hitachi continues with its line of UltraVision DVD camcorders, the 3.3 mega-pixel DZGX3300A, the 2.12 mega-pixel DZGX3200A, the 1.3 mega-pixel DZGX3100A and the 680K pixel DZBX35A, which are the first to burn on all four camcorder DVD formats (DVD-R, DVD-RW, DVD+RW and DVD-RAM). All models include 2.7" widescreen LCDs and now support both Windows and the Mac.

The Everio line of hard drive camcorders continues with four new models, the $600, 20GB GZ-MG21, the $700, 20GB GZ-MG27, the $800, 30GB GZ-MG37 and the as-of-yet unpriced, 30GB GZ-MG77. All except the GZ-MG77 include 32X optical zoom lenses, while the GZ-MG77 includes a 10X optical zoom lens instead.
JVC also introduced an external DVD burner specifically designed to be used with selected Everio hard drive camcorders, the CU-VD10 Share Station. The $200 burner connects to the Everio camcorder via USB 2.0 and can burn an hour of footage in about 45 minutes. The burner can also be attached to a computer and be used as a standard 8X DVD-R/4X DVD-RW burner.

Also in Samsung's lineup: two more flash memory-based sports camcorders with 2" LCDs, the 512MB SC-X205L ($500) and the 1GB SC-X210L ($600). Both also include SD card slots as well, and optional external lipstick cameras will also be made available for more extreme shooting situations.

The two rival high-def disc factions were out in force. A few companies like Sonic Solutions, Nero and CyberLink announced Blu-ray playback and burning capabilities were forthcoming in their future products. But the bottom line is that high-definition format players aren't here at this very moment. We expect some players to be rolled out this spring, but burners will take a while longer to emerge (although media mavens Maxell, TDK and Panasonic have already announced the development of blank Blu-ray Discs.)

H.264 Hardware Playback On the Way

CyberLink announced that they have developed decoders that allow for hardware playback of H.264 content on both the ATI Radeon X1000 graphics processor with Avivo technology and NVIDIA's newest GeForce graphics processors with PureVideo Technology. The H.264 DxVA Decoder will be included within CyberLink's MPEG-4 AVC pack for PowerDVD.