In the beginning, the engineers made Mini DV and FireWire, and the video industry was happy. But media makers are never happy for long and they looked toward the horizon for a richer medium. So the engineers invented Hi-Def video, and the video industry was once again happy. But this new format needed all new gear (and the manufacturers were happy). The producers had the HDV cameras and the editing software companies scrambled to add support. Now the Hi-Def crews demanded accessories so FOCUS Enhancements produced the new FireStore FS-4 HD and FireStore FS-4Pro HD Direct To Edit (DTE) disk recorders.

This new FS-4 line recorded both Hi-Def and DV25 via FireWire in both 720p or 1080i MPEG-2 transport streams. The DTE units work with leading HDV video camcorders and decks including Sony's HVR-Z1U HDV camcorder and JVC's GY-HD100U ProHD camcorder. Producers can then connect to a PC or Mac via FireWire for immediate editing. They both have a 40GB (3-hour) internal disk drive. The FS-Pro HD recorders offer an optional 80GB (6-hour) drive. Both have shockproof chassis, weigh about one pound including battery and are only 1.5-inches thick. The drives come with a removable Li-Ion battery pack.

Ever get three-quarters of your way through recording a voice over onto your hard drive to have the fan kick on as loud as a leaf blower drowning out your perfect take? Alienware to the rescue. By introducing liquid cooling technology, Alienware is able to substantially reduce overall system noise levels. Not only do their systems operate at less than 35 dB, they claim their machines need less maintenance and deliver up to a 30% improvement in thermal performance. Go ahead, throw as many filters on that video clip as you want. Check out Alienware's MJ-12 desktop workstation.

What Comes After A? B, of Course 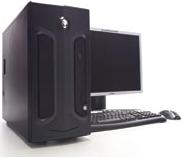 Panasonic has announced the follow-up to the very popular
AG-DVX100A: the AG-DVX100B. There are over two dozen
enhancements to the 24p/30p/60i Mini DV camcorder. The
four-pound camera is the first DV camcorder to allow
camera-to-camera time-code synchro and user-settable file
transfer via FireWire for simultaneous, multi-camera shoots. It has improved signal-to-noise ratio for better low light recording, a higher resolution LCD (210,000 pixels), a more sensitive on-camera mic, a slower middle zoom speed and a speaker closer to the LCD to make audio easier to hear during playback. The camera is now Black Sapphire and is RoHS-compliant which means it is virtually free of lead, arsenic and other hazardous substances (this will be a requirement for all cameras sold in Europe after July 2006). The DVX100B has the same 1/3" 3-CCD, CineGamma curve functionality that made its predecessor a favorite for those looking to emulate the rich look of film.