No Longer in the Glass

Scientists and Engineers at Singapore's A*STAR have developed a tiny lens made of liquid that mimics the action of the human eye. PGS Precision is the company that hopes to bring this technology to market next year, first in cell phones and digital cameras. The liquid lens system alters its focal length by changing its shape. Other companies, such as Philips and Varioptic, have developed a liquid lens that uses voltage to alter the curvature of the lens ("electro-wetting") whereas A*STAR uses a non-electric thumb-wheel to change the shape. The lens has an extremely compact size, a fast response time and excellent transparency and will produce images noticeably better than the digital zooms used today. Named a Fluidlens, these lenses are smaller than a contact lens, can currently zoom up to 10x and use very little battery life to run. Keep an eye open for them in 2006.

And that is just the first prize which comes in the form of $25,000 cash and $20,000 worth of home theater system equipment. Two first place winners will each take home $10,000 cash. All three winners will have their works distribution online to millions of atom.com viewers. Intel, makers of that little chip inside your computer has joined up with AtomFilms to form the Intel Indies Film Contest. One of the catches is that you must use an Intel Processor at some point in the production process. Another is the four-minute limitation in total running time. Oh, and your video, music video or animation must be based on the theme of a magic wand (however you interpret that). One more catch: if you want to use music, you must use one of the 36 songs provided by the sponsors, downloadable from their Web site. 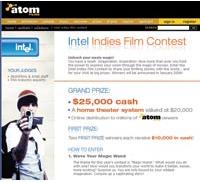 Adobe has released two updates to its popular Elements programs, Premiere Elements 2.0 ($100) and Photoshop Elements 4.0 ($100). They are sold as a bundle for $150. Premiere Elements 2.0 claims it can capture video, audio and stills from virtually any device which is good with MPEG-2 and MPEG-4 video coming from DVD, solid state, hard drive and cell phone cameras. The program not only accepts this video but it can output to them as well. Build DVD menu pages (or choose from templates), set chapter markers and burn to DVD, all from a program that will have a street price of less than a $100. Photoshop Elements 4.0 boasts automatic red eye reduction, custom slide shows, easy skin tone adjustments, easy upload process for getting your stills online and more with its new version. Sounds like a great deal for beginners or those who don't want to spend much time and effort tweaking their video and stills.