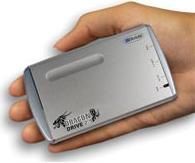 Is That a Dragon in Your Pocket?

What keeps getting bigger as it gets smaller? Portable hard drives. The new 100GB Dragon 2.5 fits in the palm of your hand and weighs about as much as a cell phone. 100 Gigabytes that fit in your back pocket, not bad. But the really cool thing is the absence of a power cable. It runs off bus power, either through the included FireWire cord or the included hydra-like USB 2.0 cable (it's the usual USB 2.0 connector into the drive but a double USB jack for the computer so you'll need two open ports). There are five different size Dragons to choose from (20GB = $99, 40GB = $149, 60GB = $169, 80GB = $199 and 100GB = $279). It comes with a black leather case. 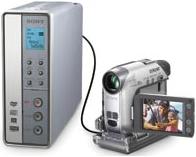 There is a lot of speculation and curiosity surrounding the acquisition of Pinnacle by Avid. Shareholders of both companies have given their approval and the proposal now goes to European regulators for their thumbs-up. We can't tell you much more than that about the acquisition for now, but we can tell you about a new version of Pinnacle Studio Plus 10 that should be on the shelves by the time you read this. There is not too much information on the new edition here at press time, but there is rumor of HDV as well as cell phone video editing capabilities. We expect a review copy as soon as it exists, so stay tuned.

DVD ASAP without a PC

We are often asked by readers who have a mountain of analog (and digital) videotape about the quickest and easiest way to get their memories to DVD. There are a few solutions, but here is a new (or rather, updated) one from Sony. The second incarnation of the DVDirect is the world's first dual function DVD recorder. It can burn a DVD directly from a camera or VCR, without the need of a computer, in three quality modes. It claims high quality MPEG-2 encoding from both digital or analog devices using standard 4.7GB DVDR/RW discs or 8.5GB DVD+R DL (double layer) discs. Connected to a computer, it can burn a full disc in as little as six minutes at 16X via USB 2.0. Award winning Nero software is included.
www.sonyburners.com/dvdirect

The rumors over a video iPod are starting to get old. Creative stepped to the plate with its 30GB Zen Vision that will retail for $400 when it finally hits the streets. It can handle playback of MPEG-2, MPEG-4, DivX, XviD, WMV and MJPEG video files on its 3.7", 640×480 pixel, 262,144 color LCD screen. If that's not enough, it will also support TiVoToGo. No official release date has been announced as press time, but it should not be long until we find out.