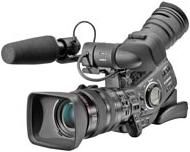 Canon Announces HDV Camcorder
At press time, Canon had just announced its first HDV camcorder, the $8,999 XL H1. The high-end camcorder is based on the XL chassis, and can output both HDV and standard-definition. The unit includes advanced genlock and uncompressed HD-SDI output capabilities, positioning it for serious broadcast applications. A focus help feature includes a magnify setting. Presets can be saved to an SD or MultiMedia card for use on another XL H1. Optical image stabilization rounds out the XL H1’s feature set.
www.canondv.com

We’re Very Open to This Idea
We would like to extend a large thank you to companies working together to make compatible technology. While the hi-def DVD companies go to battle with visions of holy grail profits, other companies like Adobe, Dell, HP, Intel and Microsoft are now banding together to make HDV and HD products that play well together while also “delivering optimal performance at a price point that is unbeatable.” These companies ensure compatibility between any hardware and software products that carry the black and gold OpenHD Certified logo.
www.openhd.org

If You Can’t Beat ’em, Join ’em
The next generation of DVD, with greater capacity and higher definition, has been delayed by the bickering of the two camps: Blu-ray and HD DVD. Samsung, on the Blu-ray team, has announced that it will release a machine next year that will play both formats if the two rivals cannot figure out a way to unify. Blu-ray claims it will hold up to 25GB in its single-layer version or 50GB in its dual-layer version, and can be used for movies, data storage, and even games for the upcoming Sony Playstation 3. HD DVD will come in 15GB (single-layer), 30GB (dual-layer) and 45GB (triple-layer, still under development) flavors; and claims, for its movie releases, to include a movie file that will be playable on today’s players. Joining Samsung in the Blu-ray camp are Sony, Panasonic and Philips. The HD DVD team includes Toshiba, NEC and Sanyo. Samsung has been known to support multiple standards in the past with cell phones and mobile video devices. The shorter wavelength blue lasers used in these two formats allow manufacturers to pack more data into the same space than the red lasers used in today’s DVDs.
www.samsung.com

Macromedia Studio 8
Macromedia Studio 8 includes upgrades to all of its major components (Dreamweaver, Flash Professional and Fireworks), as well as other programs, and should be on the shelves by the time you read this. If you are producing video for the web, you’re probably already using at least one older version of these programs, if not all three. And some of the most creative animation we have seen within video has been made in Flash. One new feature is an included plugin for exporting Flash video files straight from many major editing software programs. Another is the ability to make video for mobile devices such as cell phones and hand gaming devices. According to an NPD survey, 97.6% of Internet-enabled desktops worldwide are currently using Flash Player. Plus, the video player can be built directly into the Web site, eliminating pop-up windows. Check out some of the sample Flash video on Macromedia’s site to be completely convinced. (Full version $999, upgrade $399)
www.macromedia.com