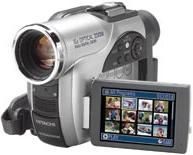 Having pioneered the first DVD camcorder five years ago, Hitachi has had time to refine its product. If Hitachi's claims are correct, it has quite an upgrade with the DZMV730A, for a very reasonable price. The Hitachi Image Engine boasts a 20 percent improvement in video noise reduction and 20 percent longer battery life. The smaller, more sleek design houses a SD or MMC memory card slot, a dedicated photo button and most importantly, a Quick Start functionality that allows for recording to begin seconds after power-on. You will need a double sided disc to get just 40 minutes of the highest quality video and you will have to deal with the troublesome MPEG2 compression in the edit bay. The stabilization is electronic unfortunately but it does have an impressive 16x zoom.

If you had $462-million in cash and stocks, you could have beat Avid in the purchase of Pinnacle. But the deal has been struck and pending the approval of the stockholders the two will become one. Avid, already the global leader in the post production industry, is poised to become even bigger with Pinnacle's award-winning professional products and its popular consumer base, which has bought over 10 million units of Pinnacle software. You'll definitely hear about these two in the near future.

The HD Market is Gearing Up

Sony and JVC brought you the first affordable HD cameras, every editing software company on the map is racing to release their HD versions and now ERG Ventures joins in by releasing a 8.4 inch LCD HDTV field monitor (with SDTV option). The active LCD area has a 1024×768 resolution and displays 16.77 million colors. The HDM-EV85 has an HD analog video input terminal (Y, Pb, Pr) allowing for a signal from an HD camcorder. The HDM-EV85 power unit is compatible with the HDV camcorder's 7.2V battery. Measuring just 8.3" (W) x 2.55" (D) x 6.96" (H) and weighing only 3.7lbs., the manufacturer suggested retail price (MSRP) for the HDM-EV85 is $2,980 USD.