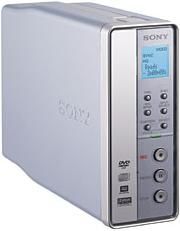 Sony Announces Hybrid Set-Top/Computer DVD Recorder
Sony has announced the DVDirect, an external USB 2.0 dual-layer, dual-format DVD burner that operates at speeds of up to 16X (48X for CDs). The drive is compatible with Windows 2000 and XP, and Aheads Nero disc authoring software is included for computer use. An 8MB buffer is included, and the unit includes buffer underrun protection.

When attached to a home entertainment system, however, it acts as a set-top DVD recorder, and includes S-Video and composite video inputs and stereo audio inputs. When used standalone, the unit operates with single- and dual-layer DVD+R media, as well as DVD+RW media, using DVD+VR recording. It can automatically place chapters on the disc every 5, 10 or 15 minutes, and synchronizes recording with most camcorders and VCRs. Users can record up to 12 hours of programming onto a dual-layer disc. Stereo Dolby Digital audio recording is also supported.

The product is available now for $300.

Turtle Beach Announces Video Advantage PCI Capture Board
Turtle Beach has announced the Video Advantage PCI, an analog video capture system featuring 10-bit color quantization. The device has a 5 1/4″ drive bay breakout connection that includes access to S-video, composite video, line and microphone inputs, along with a FireWire port and a USB passthrough. The device captures video as either DV or MPEG, and video is transferable directly to DVD. CyberLinks PowerDirector DE and PowerProducer Express packages are included with the bundle, along with AD FullCap capture software and AudioSurgeon for recording and editing audio.

InterVideo Announces DiscMaster 2 Gold and Platinum
InterVideo has announced the release of DiscMaster 2 Gold and Platinum, a disc burning application that creates CDs and DVDs in three steps, handling burning and copying of data CDs and DVDs and music CDs. Audio ripping is also included, allowing users to copy CD audio to MP3, WAV or WMA files on their computer. Both DVD-R(W) and DVD+R(W) are supported (including dual-layer DVD+R), along with CD-R(W).

The Platinum version of DiscMaster 2 includes a disc label printer and a packet-writing utility that allows blank optical discs to appear as drive letters to the computer, for convenient drag-and-drop access to files.