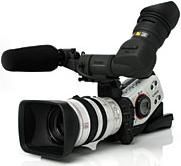 Canon XL2: A Preview
Last month, we announced that Canon had just unveiled the XL2. Recently, the editors of Videomaker had the chance to sit down with Canon video representative Jon Sagud to discuss the new camcorder in depth.

The XL2 is the least-expensive camcorder with CCDs natively configured for 16:9. It can shoot in 24P (with 2:3:3:2 and 2:3 pulldown modes available). The slowest shutter speed is 1/48 sec., for optimum performance in 24P mode.

A 2-inch color LCD monitor is a hidden, but integral part of the camcorder. To use it, just flip up the viewfinder. Speaking of the viewfinder, it is adjustable from right to left or forward and back, making it more comfortable to shoot if you wear multifocal eyeglasses or are left-eye dominant.

The XLR/shoulder pad accessory that was very popular with XL1 users is now an integral part of the XL2’s design. When using an MA-300 adapter, you can add two XLR inputs and simultaneously record four audio tracks in 12-bit audio mode.

The XL2 comes packed with a full array of SMPTE-compliant features, including a true SMPTE color bar generator and SMPTE time code generator. You can set the time code to start at any point in time for editing with no overlap in time code, or use the free-run position to set the time of day for continuous flexibility during post-production.

The camcorder boasts an expansive array of custom settings, dealing with everything from video settings (including master pedestal, knee, toe and setup adjustments) to individual color adjustments.

Check out our full review of the XL2 in next month’s issue of Videomaker.

Adobe Announces Premiere Elements
Adobe has announced Premiere Elements, a $99, Windows XP-only version of the editing software tailored for beginning video editors and editors with limited needs. The software is also available in a $149 bundle with Photoshop Elements.

The software includes built-in step-by-step help in a context-sensitive how-to field (that the user can turn off as he learns the program). Time code break scene detect is included, and ripple delete is enabled by default.

Premiere Elements also comes with a number of powerful functions. For example, built-in frame motion analysis and audio pitch adjustment have improved video speed changes. A number of GPU-based transitions are included that take advantage of machines using HyperThreaded processors or OpenGL-capable video cards. Users can also have up to 99 video tracks and 99 audio tracks on their timeline.

Premiere Elements has built in DVD authoring and adding chapter points to the project is as easy as placing them directly on the timeline. The program includes PAL transcoding so that you can send projects to friends and family in foreign countries.