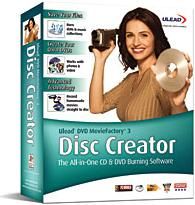 Dual-Layer Burning: The March Continues
Ulead has added support for DVD+R dual-layer burning to DVD MovieFactory 3.2 SE, a special version of DVD MovieFactory that will ship with Japanese vendor I-O DATA’s DVR-ABN8W bundle, which utilizes an NEC ND-2510 drive. Ulead reports that it expects to have dual-layer capable versions of all of its DVD burning products available by the end of the year.

Sorenson Announces 3rd-Quarter Ship Date for Squeeze 4 Products
Sorenson Media has announced that the Squeeze 4 family will be shipping in the third quarter. The suite includes both Windows and Mac versions of the Squeeze 4 Compression Suite, Squeeze 4 for Macromedia Flash MX and Squeeze 4 for MPEG-4. The Squeeze 4 Compression Suite will include HD encoding for several video formats, including MPEG-2, QuickTime and Real. The Windows version will also include support for H.264 video encoding, which outputs video at approximately 70% of the data rate of MPEG-4.

Optibase Purchases All Media 100 Assets, Retains Staff
Israel-based Optibase has purchased substantially all of the assets of Media 100 for $2.5 million, following a favorable judgement from the United States Bankruptcy Court for the District of Massachusetts. Optibase is a provider of professional editing, compositing, encoding, decoding and video server solutions for broadcasters and service providers.

Panasonic Chooses New York’s Madison Square Garden to Celebrate the 2004 Olympics and Present its "Gold Medal" Product Lineup
Report by Marshal Rosenthal
A sponsor of the 2004 Olympics, Panasonic expects to take home the gold this summer with its new "Gold Medal" lineup of camcorder and DVD recorders. First to perform are the PV-GS120 and PV-GS200; DVD camcorders featuring the same 3CCD imaging system for capturing color as found in professional broadcast cameras. Plus 10X optical zoom and still photo shooting capability (1.2 megapixel/PV-GS120 and 2.3 megapixel/PV-GS200). Both are smaller than previous models and add new "direct select" controls (the PV-GS200 also has MPEG-4 movie recording capabilities).

Next to take the field are new DIGA DVD recorders, highlighted by the flagship-model DMR-E95H. Features include a hard drive with up to 284 hours of recording time (transferring to a DVD-R/RW faster than ever before), a DV input for recording from a camcorder, and SD and PCMCIA card slots for viewing still photos. Also included is the eight day TV Guide On Screen Electronic Program guide (totally free and not requiring any phone/internet hookup). One-touch recording and an enhanced playback guide completes the package.