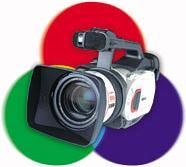 
If your camcorder has manual white balance, here’s a great way to create weird color effects in the camera, without external filters or filters in post-production. Instead of white balancing on a white card, try these ideas: