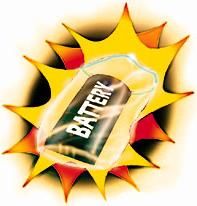 Hot off the Charger

After trying stickers, markers and other methods, we found that the easiest
way to know the status of our batteries is to use inexpensive sandwich bags.
Our rule is, "If it’s in the bag, it’s hot (charged); if it’s out of
the bag, it’s not." Bags can be re-used many times; our company’s total
price for one year’s baggies was $1.49.

Keep It in Sync

Have you ever had any problems keeping audio sync between two sources while
performing A/B-roll transitions? Try this: route audio from source A to
your recording VCR (you’ll be monitoring this audio on your TV set). Route
audio from source B to a small instrument amplifier (you won’t be recording
this audio). This makes it much easier to keep sync between sources by ear;
that way, you’ll know right away if you’ve lost sync.

If you’re like me, you’ve often cursed those almost invisible arrows on
S-video cables (the ones that indicate which side is up). Here’s a simple
solution: first, take a small drill bit (1/16 will do) and drill a hole
in the black rubber casing of the plug just behind the arrow. After removing
any plastic shavings, fill the hole with a very tiny amount of white silicon
or white epoxy. Wipe it clean and you have a permanent reference mark that’s
easy to see; no more squinting or searching for a bright light.

Recently, I was able to put an old retired wall mirror to good use during
a late winter shoot. We needed to get a shot of a north-facing storefront
while including the large sign at the edge of the parking lot. This dark
green sign was low to the ground, so in order to include the store in the
background, we had to shoot facing the south (and therefore sunward in our
northern region). Scheduling the shoot for the early morning hours, we managed
to limit the sun to the far left of our camera angle, but the sign was still
in shadow. Using the mirror to reflect the early morning sun onto the sign,
we were able to adjust the angle and tilt of the light so that no edges
or shadows were present. The result worked extremely well, and we used it
as an opening shot on a TV commercial.

If you want to add excitement to the audio track of your videos but you
don’t want to use expensive digital effects equipment, try using a simple
guitarist’s stomp box (foot switch). Great effects like reverb, delay, flange
and even pitch shifting can be found at any music store or pawn shop for
about $50. You’ll need two RCA-to-1/4-inch adapters to cram the effects
into your setup, but you’ll get great results.

Hold the Stone, Not the Cord

Much of my video work involves interviewing senior citizens for a family
video history company. In the studio, I use clip-on wired lavalier microphones.
Unfortunately, many of my subjects are camera shy, and to relieve their
uneasiness, they play with the microphone cables. In spite of my firm suggestions
that they suppress this nervous behavior (at least for the duration of the
interview), the problem continued.

I have since purchased a small variety of palm-sized worry stones from
which I let the interviewees choose to hold and fiddle with during the interview.
My microphone cables are now much happier, and the stones even seem to put
the interviewee at ease in front of the camera, vastly improving the quality
of our taping session.