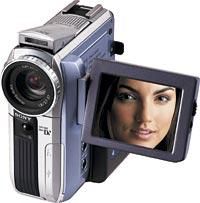 Sony’s DCR-PC105, a new compact and lightweight Mini DV camcorder, features a 10x optical zoom lens, a one-megapixel CCD and includes a 2.5-inch touchscreen LCD viewscreen that includes a touch focus feature. It has a pop-up flash for still images, and both the infrared-illuminated NightShot and color slow-shutter recording for recording video in low-or no-light situations.

MacroSystem US’ Avio DVD is a new version of the Avio standalone editor, with an available DVD-R burner and a 40GB non-removable hard drive that can store 2.4 hours of DV video. The box has S-Video and composite video inputs and outputs, as well as a FireWire interface. The Avio comes with a Logitech trackball and utilizes a storyboard user interface.


2d3’s SteadyMove Plug-In for Premiere Pro is available in an advanced version that goes beyond the features that are incorporated into the basic version included with Premiere Pro. The program can remove unwanted movement by calculating the relative camera movements between frames to stabilize the image.


Pioneer’s PRV-LX1 professional DVD-R/RW recorder for DVD-Video includes an internal 120GB hard drive, and offers the ability to customize DVD menus and chapter points. A second DVD burner can be added to the unit to burn two discs simultaneously. The unit accepts component, S-video and composite, along with stereo XLR and RCA (unbalanced) audio connections. A FireWire jack for importing DV video is also included.


Maxtor’s new OneTouch external FireWire, USB 2.0 and FireWire/USB 2.0 combo hard drives include Dantz’ Retrospect Express software, capable of making backups automatically at the schedule you choose, as well as on demand, with a press of the drive’s OneTouch button. The OneTouch button can also be programmed to launch other applications.

A power switch rounds out the drive’s new features.


Century Precision Optics presents the LCD Widescreen Magnifier, which displays a true anamorphic representation of footage shot in 16×9 mode for camcorders that do not contain a letterbox feature for the footage that they capture, or for shooting with anamorphic 16×9 accessory lenses. As an added benefit, the magnifier keeps stray sunlight off of your viewscreen, keeping it visible in the sun.


HP’s dvd300e and dvd300i DVD burners are DVD+R/RW units that can burn DVD+R discs at 4x. The dvd300i is an ATAPI internally mounted unit, while the dvd300e includes both FireWire and USB 2.0 connections. Both units are bundled with ArcSoft ShowBiz DVD, HP Memories Disc Creator, Cyberlink PowerDVD and Veritas RecordNow, to fulfill basic DVD and CD authoring and playback needs.