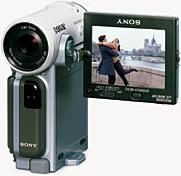 Itty Bitty
Sony’s super small DCR-IP7BT camcorder uses the new MICRO MV format videotape and incorporates Bluetooth technology, an international wireless data transmission standard, to send MPEG e-movies and still images by e-mail and can even browse the Web. All you need is a compatible mobile phone or the included Bluetooth adapter. A 680,000-pixel CCD, 10x optical zoom, analog inputs and outputs, a Memory Stick slot and 2.5-inch LCD are among its other features.

Apple recently released iDVD 2, an upgrade to its previously released DVD-authoring software. The new plug-in program includes menus to assist DVD project layout and organization, and uses a drag-and-drop interface. It also allows users to simultaneously MPEG-encode a DVD in the background as the project is building. iDVD 2 requires Mac OS X 10.1, a Power Mac G4, 256MB of RAM and a DVD SuperDrive.

Mobile Video Studios’ Eagleye portable production studio comes with four telescoping monopods, a Videonics MXProDV mixer, a 12-channel Mackie mixer and containers for transport. It also features the Power Control Center, which allows the user to select any one of four cameras for remote focus, pan, zoom or fade. The system includes three JVC or Sony monitors (your choice), Panasonic’s AGDV digital deck and a Sensomatic Quad processor, which splits one screen into four sections.

The space-age design of the RS-121 highlights Vivastar’s latest external DVD-R drive. The write-once drive connects to any PC via a SCSI-2 interface and writes to 4.7GB DVD-R discs at both 1x and 2x speeds. It can read 4.7GB DVD-R, DVD-Video and DVD-ROM.

If your batteries run down and there’s not an electrical outlet in sight, you’re stuck, right? Not if you have Electric Fuel Corp.’s INSTANT POWER disposable batteries. They use zinc-air fuel-cell technology and provide up to 10 hours of continuous use. The batteries currently work with Sony and JVC camcorders and are non-toxic when thrown away.

Designed for the introductory-level producer, ArcSoft’s ShowBiz Editor is an editing software package that promises to be user-friendly. It includes special effects, scene transitions, sound effects, titling, color correction, real-time previews and more. It outputs to tape, e-mail, the Internet or CD-ROM.