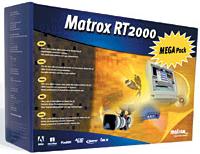 The PYRO 1394 WebCam connects to your computer’s FireWire port, has a data transfer rate of 400Mbps, 640×480 resolution at 30 frames per second and utilizes a Sony CCD optical system. The bundled software includes Smith Micro’s VideoLink Pro, Microsoft NetMeeting and ArcSoft PhotoFantasy 2000, as well as TeVeo’s TeVeo Live 2.1. The PYRO 1394 WebCam is compatible with the Windows or Macintosh OS.

The iAVerKey DV from Aver Media lets you project simultaneously, any iMac DV, Power Mac G3 or G4 image onto a computer and TV monitor. Features include a touch button control panel and zoom and pan. The iAVerKey DV comes with S-video, RCA and VGA cables, Mac VGA adapter and monitor adapter.

Case Logic’s DVC-40 camcorder bag is for smaller DV camcorders. It features accessory pockets for storing cords, batteries, cassettes, adapters and manuals. It comes with a detachable shoulder strap and can also wear as a waist pack. The DVC-40 is made from lightweight, weather-resistant material with a reinforced bottom and shock-resistant padding.

Dazzle Multimedia’s Hollywood DV-Bridge allows you to convert analog video to DV and DV to analog. With Hollywood DV-Bridge you can view your video on a TV monitor while transferring it to the computer. It automatically detects both NTSC and PAL signals and is Mac or PC compatible.

Head Above the Rest

The new Gitzo G2380 video head weighs three pounds and incorporates a bilateral pan bar that converts to either right or left hand operation as well as a sliding quick-release plate that allows the camera to be balanced from the front or rear. A secondary safety catch built into the plate protects the camera from sliding off the head.

StageTools has released a Macintosh version of its MovingPicture pan and zoom application as a plug-in for Avid’s Media Composer and XPress and Adobe Premiere and After Effects. MovingPicture is a tool that allows you to pan and zoom on high-resolution images rather than using a motion-control rig.

Reach for the Sky 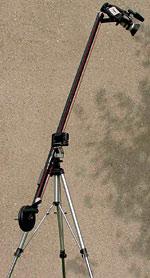 The SkyCrane Junior Mini DV camera jib is cable driven, incorporating its own vector ball-bearing head and mounts on most tripods. It features an adjustable friction brake for more boom control and supports cameras up to eight pounds. It has an overall length of eight feet and weighs 17 pounds.

The Camera Cage 1 from Petrol Bags features internal skeleton and thermoformed panels to provide durability and protection for your Canon XL1 or other similar sized camera. The outer cover of the bag is made from layered nylon fabric and foam padding. Distributed in the United States by 16×9, Inc.