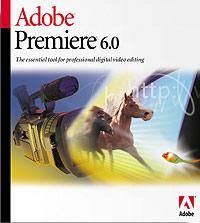 The Big Premiere
Adobe Premiere 6.0 is compatible with Windows or Macintosh and includes built-in support for digital video devices. Premiere 6.0 supports one-step Web output and has an "automate to timeline" feature. This feature allows you to send an entire sequence of clips from the storyboard or project window directly to the timeline.

The new Gitzo Explorer Series tripods from Bogen feature a leg-angle locking mechanism that allows the legs to be individually locked at any angle from 0 to 90-degrees. A shoulder knuckle design allows the column to be tilted 100 plus degrees and rotated freely through 360-degrees and locked in any position.


Maxtor Corporation’s 1394 External Storage is a hard drive that uses the IEEE-1394 FireWire interface. It comes in 40GB and 80GB capacities and measures approximately 2x6x9-inches. The Maxtor External Storage is hot swappable (can be plugged in or taken off without shutting down the computer) and features a data transfer rate up to 400Mbps. Use it to store video, digital music and digital photos.


LaCie’s compact PocketDrive comes in 10GB, 20GB and 30GB sizes, has both FireWire and USB connections and is compatible with Mac or Windows. The PocketDrive portable hard drive has a rubber shock absorber the company claims can withstand a 3G drop.


MedioStream’s CAMpeg RT is a stand-alone software solution that converts DV to MPEG-2 in real time. It works with PCs equipped with Pentium III or AMD Athlon processors and Windows 98, 98SE, 2000 or Windows Me. There’s no need for special encoding or decoding hardware.