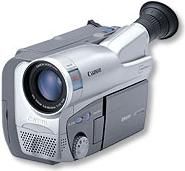 Canon’s new low-priced ES410V 8mm camcorder was designed for the novice videographer but has some of the same features found on more expensive camcorders. It comes with a 2.5-inch color LCD viewscreen, 22x optical and 500x digital zoom, image stabilization and a variety of effects and fades. (800) OK-CANON

@udio & video office, from Magix Entertainment is a new streaming media and content package that includes a 16-track editor for audio, video and graphics that can output a project in both streaming and non-streaming media formats. (310) 656-0644

Videonics, Inc. claims their new DistanceDV extends a DV signal connection up to 164-feet. DistanceDV is comprised of a single IEEE-1394 compatible cable with a built-in proprietary filter and equalizer that connects directly to DV devices. Available in 33-, 66- and 164-foot lengths. Ships with four to six pin adapters.