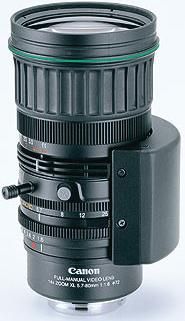 Adapted from Canons line of broadcast TV lenses, the XL14X Manual Zoom Lens conforms to the XL1s lens mount specification to allow for communication between the lens and XL1. The 14x lens is equivalent to a focal length of 41-577mm in a 35mm film camera. The XL14Xs manually controlled features include zoom, focus and iris. (800) 652-2266

New from Ewa Marine comes the VPC housing, which is available for use with most of the Sony DCR PC series of digital camcorders. Designed for use above water or up to 30 feet below, the VPC includes an optical quality glass port in front of the lens and a plastic window on the rear of the housing for viewfinder access. You control buttons through the flexible housing and access controls via a finger sleeve. (516) 242-6801

In addition to their line of royalty free and stock footage, PhotoDisc introduces The Film Series. The stock footage library consists of six cross-platform compatible CD-ROMs. Each of the six two-disc sets has its own theme including Skyscapes, Wind and Clouds, Natural Landmarks, Business Day, Buildings and Monuments and Transportation and Traffic. Each set includes 14-22 scenes originally shot on 16mm or 35mm film. PhotoDisc provides three resolutions for each scene; 720×486 pixels at 30 fps, 320×240 pixels at 15 fps and 160×120 pixels at 15 fps. (800) 528-3472

The World Sounds Library from Wink World Music includes tracks from around the world. Each CD-ROM includes 63-72 clips. Disk themes include The Americas, The Latin Vybe, Smokin Funky Beats, Africa and Europe & Asia. Each clip is available in Windows .WAV or Macintosh .AIFF format.