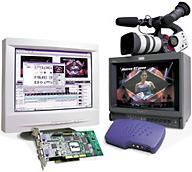 
The DVC-50 camcorder bag from Case Logic was designed specifically for digital camcorders. Made of a leather-like material, the bottom features a PVC coating to protect your gear from moisture and to add durability. With zippered pouches for accessories, the main compartment features a double-zippered opening.
Suggested Retail Price: $40


Can’t find the right music for your production? Don’t have any musical talent whatsoever? Smart Sound from Multimedia’s Maestro lets you custom tailor loop-based music to the perfect length, tempo & style. It asks you to enter a style, name and length and then it generates a custom tune for you. Audio palettes (extra) add new styles and loops. Available for both MacOS and Windows systems. (818) 718-9999


Shure’s SM7A cardioid dynamic microphone is said to be ideally suited for voiceover work. Designed for discerning speech and music, the SM7A has a frequency response of 50 -20,000 Hz. Features include electromagnetic shielding and an internal shock isolation air suspension. (847) 866-2200


From Video Seal Skins comes the Canon Camera Cover, which is designed to fit the Canon XL1. Providing protection from the elements, the cover can be used while the camera is mounted on a tripod. The weather-proof cover is available in a variety of solid colors and camouflage patterns. (877) 272-0993


The 13GB Medea VideoRaid SCSI 2/13 from Medea Corporation, provides up to one hour of digital video storage. Medea claims a sustained data transfer rate of 18MB/sec due to its proprietary Zone Stripe Technology (ZST). The unit can be attached to any Ultra Wide or Ultra2/LVD SCSI equipped Macintosh, SGI or PC and uses only one SCSI ID. (888) 296-3332


PowerProduction Software’s Storyboard Quick 3.0 is a storyboard creation package complete with pre-drawn locations, characters and props. The package features a drag and drop interface. It imports digital images, characters and props that can be laid over actual photographs of your locations. It’s available for MacOS and Windows systems. (408) 358-2358


What weighs one-pound and attaches to any camera in ten seconds? The Zeper Industries Miniprompter is claimed by it’s manufacturer to be all of the above and more. Powered by four AA batteries and controlled by a wired remote, the Minipromter can scroll your handwritten or computer printed text at various rates. (215) 646-3545