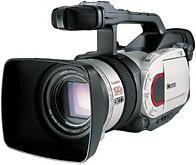 Another Hot 1 from Canon


Need rush hour traffic or flames dancing across the screen? Eye Wire Video’s royalty free stock footage collection comes on 16 CD-ROMS, each holding 13 to 47 QuickTime formatted movies. The collection can be purchased individually or as a set.
(800) 661-9410

VUIT from BeachTek Inc. mounts to the camera shoe of the Sony VX1000 and connects to the RCA audio jacks to allow VU-meter audio monitoring. The VUIT features a Tri-color LED bar-style meter and runs on the camcorder’s own power.
(416) 690-9457


Fighting glare in a neighborhood near you, it’s HoodMan. HoodMan attaches to your camcorder’s LCD view screen with a hook-and-loop fastener. Available in four sizes, HoodMan accommodates most camcorders with LCD screens ranging from 1.5 to 6.4 inches.
(800) 818-3946


The 1502 PHCS Porter case by Porter Case Inc. rides on two 4-inch ball bearing wheels and features a retractable handle. Great for stashing away all of the incidentals necessary for a video shoot, the 1502 PHCS weighs less than 13 pounds yet carries 200.
(800) 356-8348