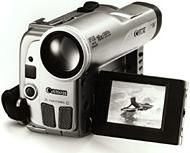 Another ‘Ura from Canon

Featuring 16x optical and 320x digital zooms, the Canon Ultura is the latest Mini DV camcorder from Canon. The Ultura’s feature list includes an IEEE 1394 connection, Optical Image Stabilization and Canon’s FlexiZone AF/AE Image Control System. Canon says the unit includes a built-in Auto Edit Function which allows the user to select up to 20 scenes to be automatically transferred to a VCR. (800) 828-4040


The I-Cuff, from Raider Productions, is designed for shooting with or without glasses. The after-market product blocks light from entering most 3.5-inch or smaller viewfinders. (800) 793-3006


One of many in Lowel’s new smaller and more compact GO Kit line, the Tota/Omni GO Kit 98 includes two Omni-lights with barndoors, one Tota-light, three Uni-stands and one GO 85 Case. The whole package is small enough to take as carry-on luggage on an airline.


FireWire 2 Go from Newer Technology brings FireWire to the Apple Laptop. MacOS 8.6 on a 300MHz or faster Macintosh PowerBook G3 with a CardBus bay is recommended for DV captures. (316) 943-0222


The camera mount U100 series wireless UHF microphone from Audio-Technica features true diversity operation. Available with the ATW-U101 Belt-Pack System or the ATW-U102 Plug-On System. Both systems include the ATW-R100 receiver. (330) 686-2600


From Varizoom Lens Controls, comes a remote lens control for the Canon XL1 and Sony DCR-VX1000 and DCR-TRV900 and other camcorders. A combination rocker and speed control dial allows user to vary speeds in a single movement. (888) 826-3399