Back to the Sound Pool

Magix Entertainment Corporation’s Music Maker 3.0 software allows digital
composers to choose from over 1200 digital samples to create their own musical
artworks. With a drag-and-drop interface, the Music Maker’s 16-track arranger
window reduces the process of composition to a simple cut-and-paste procedure.
As an added bonus for digital videographers, Music Maker gives you a way
to easily replace the soundtrack of any .avi file. (310) 656-0644.

Hitachi’s VM-H835LA Hi8 camcorder features a 3-inch color LCD monitor, five
digital effects, electronic image stabilization and a 16:1 optical zoom
lens with up to 130:1 digital enhancement. A built-in monaural speaker lets
you hear what you’ve recorded as you watch on the LCD monitor; other features
include a stereo built-in microphone and four kinds of fade (white, black,
wipe and zoom). (770) 279-5600. 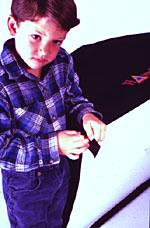 Hollywood FX version 3.5 is designed to help nonlinear videographers develop
their own 3D effects within many of the most popular nonlinear software
interfaces. A powerful new path editor allows you to determine your own
motion paths, and multi-processor support enables blazing new speeds and
optimized rendering. (801) 281-0237.

Photoflex Inc., a leading manufacturer of lighting products for film, video
and photography, has announced two improvements to its popular line of soft
boxes: the Quick-Release Corner and Bullet-Tipped steel support rods. The
Quick-Release Corner design makes tear-down much easier with a simple Velcro
tab, while the Bullet-Tipped steel support rods prevent the possibility
of the rods poking through corners of the fabric. (800) 486-2674.

Parnassus Software’s Script Werx is a major upgrade and name change for
Scriptwriting Tools, a series of standard scriptwriting templates which
has been sold by Morley and Associates since 1992. With a total of twelve
templates that you can immediately incorporate into your copy of Microsoft
Word 6.0 or above, Script Werx includes a number of macro shortcuts designed
to have a script generate its own storyboard, shot list, scene list or teleprompter
text. (818) 952-5210.

Fresh Music, a buyout production audio library with over 45 CDs, offers
SearchTrack, a free search engine on CD-ROM that cross-references audio
tracks in the entire Fresh Music library. Search operators include keywords
for emotion, style and use to pin-point the exact track you need for your
production. Once you’ve made your selections, you can print the worklist
you’ve created and go shopping for music. (800) 643-3438.

A Case for Tiny Camcorders

Today’s itty-bitty stealth cameras–such as the Sony DCR-PC7, the Panasonic
PV-DV700 and the JVC GR-DVM1–are so small that they’d get lost in many
larger camera bags. One solution is Case Logic’s CB series of small camera
bags, which combine a sturdy design with convenient features and attractive
styling. Models range from the basic CB-1 to the full-featured CB-3, which
adds a rain hood for all-weather protection and a pleated, expandable case
for accessories. (800) 925-8111.