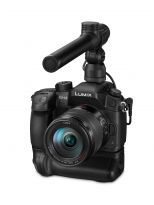 One of the most exciting features of the Panasonic Lumix GH4 is its ability to shoot 4K video and accessorize for digital cinema production. It's the world's first Digital Single Lens Mirrorless camera capable of 4K video output. This appears to be Panasonic's step forward to attract videographers to its line of mirrorless micro four thirds cameras. The Lumix GH4 is able to shoot 4K video in two different sizes. It can shoot DCI 4K (4096×2160) at 24p and Ultra HD 4K (3840×2160) at 30p and 24p.

A powerful accessory for the GH4 is its interface unit that allows for XLR audio inputs with level adjustments and monitoring. The interface unit also allows for video output over HDMI and SDI, with 4:2:2 color sampling and up to 10 bits of bit depth.
MSRP not available at press time

The Blackmagic Production Camera 4K is now shipping and available for purchase worldwide. The camera shoots video at the Ultra HD resolution of 3840×2160. Files are recoded in the ProRes 422(HQ) format to a built in SSD recorder. The ProRes format makes the files ideal for holding up to extensive post-production workflows while maintaining a reasonable file size. A full version of DaVinci Resolve is included with the camera. This gives the owner the ability to perform full professional level color grading to their footage. The new Blackmagic Design camera features a Super 35 sensor with an EF and ZE compatible lens mount. The camera's 5" LCD touchscreen allows the user to enter metadata, another feature the camera boasts. The camera is able to output 10-bit HD and Ultra HD footage through a 6G-SDI output. Like the Blackmagic Design Cinema Camera, the Production Camera 4K can be highly accessorized with third party products.
MSRP: $2995

The EOS Rebel T5 features an 18 megapixel CMOS image sensor and a DIGIC 4 image processor. It's compatible with Canon EF and EF-S lenses. When it comes to video the EOS Rebel T5 is capable of shooting full HD 1080p footage at 20, 25, and 24 fps. It is also capable of shooting 720p video at 60 and 50 fps. An interesting video feature that plays into the social media trend of short videos is the Video Snapshot feature that allows the user to capture clips in lengths of two, four, or eight seconds, and combine them into a highlight clip. It also features several in-camera creative filters such as Toy Camera, Fisheye and Miniature Effect. This camera is aimed at the enthusiast who wants to capture high quality images and videos while having fun. The Canon EOS Rebel T5 comes with a standard Canon EF-S 18-55mm lens.
MSRP:  $550