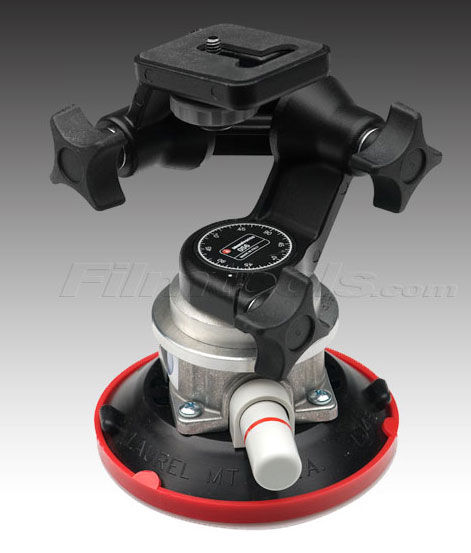 Utilizing these cinematography techniques require the use of specialized equipment to enable the required setups. There often come situations where a camera needs to be supported independently on objects or surfaces, one such application being shooting the interior of a moving car without having to outfit the vehicle with bracing supports for camera. This is where camera mounts with suction cups come handy.

As the name hints, the Gripper 3025 Jr. is the junior version of Filmtools Gripper 3025 vacuum cup camera mount. The fixture utilizes the power of vacuum to support the equipment. The original had a larger suction cup and thus would support larger cameras whereas the 3025 Jr. has been designed to support smaller cameras. Outfitted with a 4.5 inch suction cup, the Gripper is well capable of supporting DSLR and DV cameras weighing up to 6.5 pounds.

The fixture consists of a Manfrotto 3025 3D Head on which the 4.5 inch suction cup is attached. The head is capable of a full 360 degree orientation about the vertical axis and 180 degrees about the horizontal axis. This allows the camera to be positioned in any direction utilizing these movements. Once oriented, the position can be locked prior to filming.

Suction to the Max

Unlike conventional suction cups which need to be depressed in order to evacuate the trapped air, the Gripper has been provided with a hand actuator which can be pumped like a plunger to establish a vacuum. The method is not only ergonomic and fast, but it also ensures a reliable hold as it expels the air out more efficiently. Furthermore, a red ring on the actuator indicates if vacuum has been lost. If this ring becomes visible, the actuator needs to be pumped to re-establish the suction. To remove the cup, one simply has to lift the release tab located at the rim of the cup.