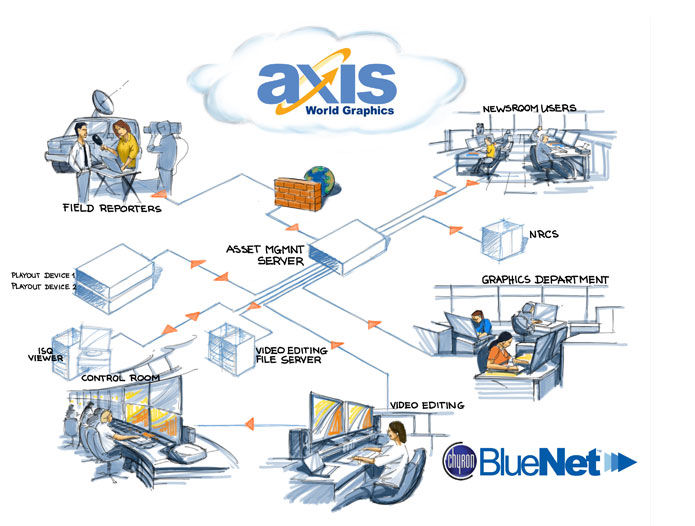 The Chyron Bluenet is an end-to-end workflow and order management system that can be utilised to minimise the time taken from graphics being created to being broadcast on television, increasing the speed of programme production. Chyron Bluenet is used by a large number of leading broadcasters and sports networks to improve their workflow.

Chyron is an award-winning company that offers a wide range of graphics solutions, all of which can be smoothly incorporated into the Bluenet workflow. Bluenet incorporates the full suite of Chyrons graphics broadcasting tools, which include Lyric PRO, HyperX, Camio, MediaMaker and more. This combination of software allows the production process to be completely streamlined and allow real-time broadcasts to be made.

Chyron Bluenet can also be integrated with Axis World Graphics, extending the power of this systematic workflow even further by enabling graphics to be shared easily and quickly. Axis World Graphics are the leaders in providing on-demand, secure, hosted graphics for television and other media production.

This award-winning workflow process is now utilised by a number of major broadcasting companies, including Sinclair Broadcast Group, Raycom Media and the NHL Network. NHL Network use Bluenet to support some of their most popular shows and ensure that the graphics are seamless from start to finish. You will be able to see the workflow in action on programs such as NHL Live and NHL on the Fly. Raycom Media have rolled out the Chyron Bluenet workflow across all thirty-one of their stations across the United States, resulting in a much smoother processing, and they intend to implement a second stage to this in the form of Axis World Graphics.

Bluenet builds on the Chyron products that broadcasters are already familiar with, meaning it is a simple process to implement, and also provides a flexible solution that can be adapted to any situation.