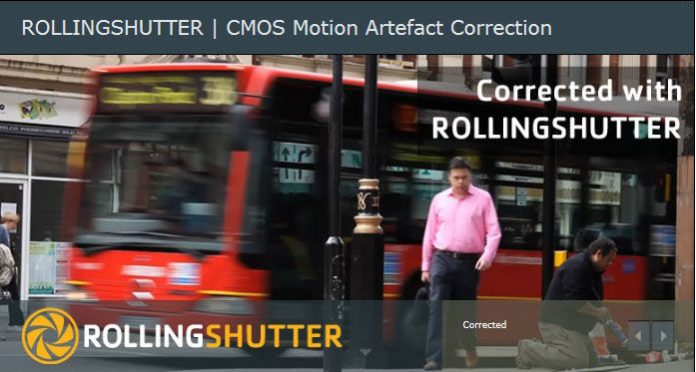 Digital cameras used nowadays mostly employ the use of either a CCD image sensor or a CMOS sensor. The Foundry’s RollingShutter derives its name from the mechanism in which the CMOS cameras obtain images. Although some high-end CMOS cameras have a global shutter mechanism, the more common cameras have the rolling shutter.

As its name implies, the shutter rolls (moves) either vertically or horizontally when the camera takes images. Due to this motion parts of the image area are not exposed all at the same time, but sequentially. In instances where either the camera or the subject is moving, abnormalities such as wobble, skew and partial exposure appear in the images. RollingShutter is a software plug-in for The Foundry’s Nuke and Adobe’s After Effects image processing software that rectifies these aberrations.

The software converts the pixels of the image into vector entities. It then estimates the motion of the entities respective to the movement of the bordering pixels. Depending upon their relative movement, the pixels are either moved forward or backward and the image rectified for the abnormalities. Each object in the image is rectified individually.

The software has a number of different tools to further fine tune the image correction process. Shutter sync is a useful tool that allows you to counter the “kink” anomaly that may be introduced into the image when images of accelerating objects are rectified. Correction can be applied to intentionally distort normal images or to remove skew from images that have been captured by a camera with different movement of its rolling shutter (bottom to top for instance). Vector detail allows you to increase or decrease the number of pixels on which motion estimations will be performed; a higher number will result in more detail but increased processing time. Matte controls allow the software to separately identify the background from the foreground. A number of other tools are also present in the software.

RollingShutter has its limitations regarding the correction it can produce. In some scenarios like blurry and complex motions, the software may not rectify the image completely. Cameras with global shutter may yield better results than images corrected with RollingShutter in instances where there is severe shaking of the camera platform.

After Effects CS5 or CS5.5 on Windows or Mac OS X (for RollingShutter 1.1)