Montage 1.3 is screenwriting software developed for Mac OS X (including Leopard) that can import and export Final Draft documents and includes pre-formatted templates for feature film, TV and theater scripts. The program also integrates with the Mac OS X Address Book, allowing for submission and tracking of queries, synopses and scripts via email. 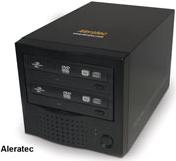 Aleratec’s 1:2 DVD/CD Copy Cruiser LS, High Speed Edition utilizes a PC’s USB 2.0 connection to either burn or apply a LightScribe label to two CDs or DVDs at once. The drives can burn DVDs at speeds of up to 20x.

NewerTech’s miniStack NAS includes both 10/100Base-TX and USB 2.0 interfaces. When connected via Ethernet, the NAS can be accessed from as many as 20 Macs and/or Windows computers. The device also allows network media players using UPnP to stream files directly over the network. The drive measures 6.5″ x 6.5″ x 1.5″ and includes a Kensington Security Slot.