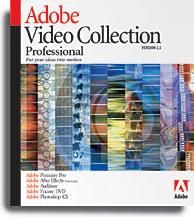 Heuris’ Indie HD Toolkit allows you to capture HDV footage into your Macintosh for editing with Final Cut Pro, or manipulation by any other applications that use QuickTime. The software also includes a utility for playing HDV footage through a D-VHS VCR and a 720p30 HD encoding plugin for QuickTime.

Are you a former Play Trinity user who misses its many unique transitions? GrangerFX’s TrinityFX is a plug-in for Adobe Premiere Pro and Adobe After Effects that contains over 500 transitions and effects originally popularized on the Trinity, including 3D DVEs, page peels and fully ray-traced scenes.

Jasc’s Photo Album 5 allows you to quickly create still image slideshows that play in DVD players. You can also add MP3 music to your presentations. Multiple slideshows can be stored on a single CD. Other image sharing options provided by the software include Internet, screen savers and QuickTime movies.

Glidecam’s Vista Head pan-tilt head features full 360-degree pans and tilts in both high and low modes. It accommodates cameras weighing up to 20 lbs, and features high-torque 12-volt motors. A joystick control with a 15-foot cable and a 12-volt AC transformer and power converter are included.