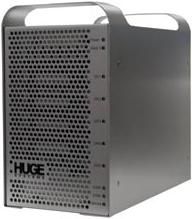 It’s Huge
Huge Systems’ MediaVault U320-R Max Disk Array series RAIDs come in capacities from 600GB to 1.25TB. The Ultra 320 SCSI-based RAIDs run in either RAID-0 or RAID-3 mode, offering your choice of high speed or additional data protection. The RAIDs boast a sustained data transfer rate of 200MB/s and are compatible with Windows, Mac OS and other operating systems.

Digital Juice presents BackTraxx 1 & 2 royalty-free music libraries to compliment its lineup of motion background libraries. The sets are comprised of 28 and 33 discs, respectively, and include themes such as atmospheric, sports, corporate and wedding.