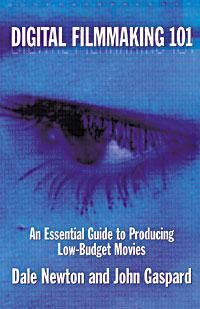 
Digital Filmmaking 101 is an informative and humorous guide to making feature-length movies with digital video.


Beginning with a few script ideas, it elaborates on budgeting and equipment choices (including discussions on whether to rent or buy certain equipment) as well as aspects of the business side. The book is a vast storehouse of ideas for acquiring capital, pre-production, casting, finding a crew, the production process, special effects, post and distribution. Newton and Gaspard have a very readable style with many first-person anecdotes, and add a lot of notes on their experiences while they made their movies Grown Men, Resident Alien and Beyond Bob.


Not a sugar-coated book as much as a book that tells it like it is, Digital Filmmaking 101 will almost certainly change your perception of getting your project off the ground.

From Home to Hollywood: An Introduction to Desktop Video


From Home to Hollywood uses the same format as other Video Warriors presentations, relying heavily on screen captures and still frames and a voiceover narrator. Loading the CD yields a Web browser window and links to two presentations: "Getting Started with Desktop Video" and "Editing with Ulead VideoStudio." The CD offers random, quick access to topics and allows for the addition of trial versions of Ulead’s Cool 3D and VideoStudio.


Getting Started with Desktop Video is basic, but effective as a background source into the world of desktop video. It discusses television formats, time code, and the differences between digital video formats. "Editing with VideoStudio" includes segments on capturing video, editing video and audio and a few tips and tricks. From Home to Hollywood captures an interesting idea with a very good presentation.


An admirable overview of the nuts and bolts of directing, Film Directing Fundamentals takes a unique approach in discussing the craft. The first half of the book takes a script and carefully dissects it, describing the actions, use of talent, staging and blocking. The book describes camera technique in depth, and handy camera setup illustrations are helpful in understanding how everything works together. It also contains a marked-up script with shot descriptions. The second half of the book discusses the impact that directing has made on Notorious, The Truman Show and 8 1/3, with in-depth analysis of some important scenes. Finally, Film Directing Fundamentals offers brief discussions of the style and dramatic structure of films as diverse as Some Like it Hot, The Insider, The Thin Red Line and Sex, Lies, and Videotape.


Full of interesting observations, this book could be a welcome addition to the aspiring director’s bookshelf.