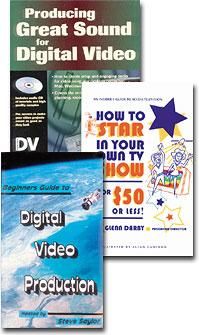 With PBS and Turner Network Television production experience under his belt, author Jay Rose brings a wealth of experience to Producing Great Sound for Digital Video.

Producing Great Sound is a manual for creating digital audio for Mac and Windows users that matches the growing capabilities of digital video and nonlinear editing systems. Rose suggests that the book will enjoy a long shelf life since, "The techniques of good sound dont change."

Although the price of the book is a bit steep, you get what you pay for. With over 300 pages and many illustrations, the book is replete with facts and useful information. Rose covers the physics of sound, as well as important step-by-step instructions for everything from using microphones in the studio and on location to editing voices and music. Hes even included a CD-ROM of samples, diagnostic tools and tutorials to enhance the book.

In How to Star in Your Own TV Show For $50 or Less, Glenn Darby shares from his experience of producing and directing over 2000 shows for Public Access television. From brainstorming to interning to directing to hosting to editing, Darby covers the spectrum of producing a Public Access show.

The numerous grammatical errors and typos dont detract from Darbys enthusiasm or knowledge of Public Access television as a medium for self expression. Its this enthusiasm and Darbys experience that make How to Star a valuable resource for the would-be video producer.

How to Star focuses on show ideas and the common and costly mistakes to avoid while working at a Public Access studio. If youve ever dreamed of hosting your own TV show or working behind a television camera, Darby shows you how to make your dreams come true.

Beginners Guide to Digital Video Production is a genuine effort on the part of Steve Saylor, to produce a video about making independent movies using consumer digital video equipment.

Unfortunately, Saylor gets in over his head. He begins by explaining how he started with no knowledge as he set out to make his own feature-length movie. From that shaky start, he describes the equipment and techniques he used to make his movie.

Saylor should have called the video Beginners Guide to Steve Saylor, as the viewer learns more about Saylor than digital video production. This should be a documentary rather than an instructional video. If youre looking for a nuts and bolts, how-to-make-your-own-movie video, youd be better served by making your own movie and documenting how you did it.