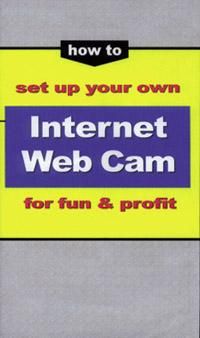 Set Up Your Own Internet Web Cam for Fun and Profit

Die-hard Web surfers have long known where to find an up-to-the-minute view of the Golden Gate Bridge, Yosemite Valley or even the streets of Moscow on the Internet. For those who want to know the techniques of setting up their own live Web camera, this videotape provides a very simple and straightforward introduction to the process.

Problem is, the skills involved in setting up a Web cam are really quite simple–so simple, in fact, that they occupy about two minutes time on the tape. The crucial information boils down to a choice between two commercial software applications that perform the task of setting up a live Web cam for you. The remainder of the tape is full of long, static shots of Bill Myers, the tape’s creator, plugging various products and providing enough filler to bring the length of the tape up to 60 minutes.


Though the role of script supervisor is one that’s usually reserved for professionals working with large crews, Pat Miller’s Script Supervising and Film Continuity offers much useful information for low-budget hobbyist videographers. Techniques such as timing, effective use of props, creating match-frame edits and scene rehearsal are useful for everyone. Though many of the skills discussed in the book are specific to big-budget movie and television sets, they’re interesting because they describe precisely how things work on a Hollywood-style film or video shoot.

Full of useful illustrations, forms and diagrams, Script Supervising and Film Continuity does have one flaw: it often reads like a job manual for would-be continuity supervisors. Nevertheless, it is much more than that. It’s a glimpse behind the curtain, a candid look at how the Tinseltown wizards pursue their craft.


As the latter portion of its title suggests, The Technique of Film and Video Editing: Theory and Practice combines discussions of aesthetic theory with real examples from past films in an attempt to instruct the reader in the fine art of film and video editing.

Though the theoretical portions of the book are at times a bit too academic, the examples form an excellent history of the moving image. Rather than just telling the reader how a jump cut is useful for creating a heightened sense of discontinuity, the author provides a handful of specific examples from French New Wave films of the 1950s.

Complete with a thorough glossary of terms and filmography, Dancyger’s book is an excellent introduction to the art of manipulating moving pictures and sound for students, amateurs, hobbiests and professionals alike.