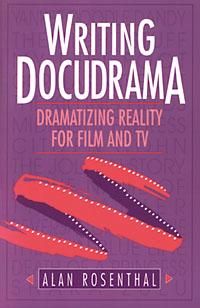 Fact-based fiction is enjoying a surge
in popularity in film and on TV, proving the old adage that real life can
be as entertaining as fiction. Writing Docudrama: Dramatizing Reality
for Film and TV explains the ins and outs of writing this popular genre,
from concept to completion. Appendices include a listing of docudramas and
a case study of two films that dealt with a high-profile subject from different
perspectives.

Author Alan Rosenthal has divided his material into clearly explained sections
on ideas: choosing, researching, and developing into stories; writing: approach,
dialogue, outline and script; and special considerations, such as rights,
options and legalities. This award-winning producer clearly knows his craft
and has done a good job of translating his skill into a useful handbook
for beginning producers. 5

Camcorder in the Classroom

One Lake St., Upper Saddle River NJ 07458, 198 pp., $27)
This book demonstrates ways that teachers in elementary, middle and
high schools, as well as in college, can use the camcorder and VCR to teach
and motivate their students. The authors do not intend to show teachers
or students how to become expert video producers, but rather to help enliven
curriculum with the addition of video.

The book is organized by curriculum, with sections for each subject area:
language arts, mathematics, social sciences, and visual and performing arts.
Each chapter provides a video practice activity that gets readers into practice
with the camcorder and gradually moves them into more difficult applications.
Suggestions for ways to involve students and parents in making classroom
videos are included in every chapter. 5

Get to Know Boris FX

Jump right into Artel Software’s Boris FX with this instructional tape
that explains how to operate version 3. The popular plug-in program runs
with nonlinear editing programs such as Adobe Premiere 4.2 and Fast Video
Machine Plus. The tape begins with an explanation of the Boris FX interface
and controls. Through several examples, users are shown how to use the features
in real-world situations. Step-by-step recipes for creating "Star Wars"
style credit scrolls, 3D cubes that explode, spherical transition effects
with splined paths, page curls with multiple pieces and flying mattes are
demonstrated. A segment is devoted to an explanation of over 20 image filtering
components, including ripples, waves, bulges and other color and channel
filtering effects. The straightforward demonstrations and concise explanations
make this tape a useful addition to the beginner’s training library. 3