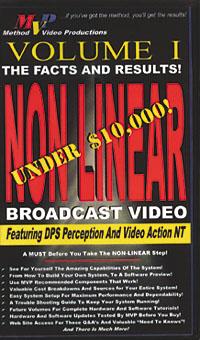 The Facts and Results, Non-Linear Broadcast Video for Under
$10,000!

If you dare to build a nonlinear system from the ground up–literally–using
off-the-shelf components and software, then this video is for
you. Although the producers claim that you can upgrade your existing
system by watching Non-Linear Broadcast Video for Under $10,000!,
they make a point of recommending that you not deviate from their
recommended components or software. They begin with the computer’s
housing and show, with good-quality closeups and meticulous explanation,
how to install the motherboard, graphics card and drives. Then
the tape’s instruction moves on to partitioning the drives, installing
and configuring the operating system (Windows NT), before going
on to installing and using Video Action NT software. This video
is a good step-by-step guide for do-it-yourselfers looking to
put together this particular nonlinear editing system. 4

This handbook mimics the "… for Dummies" series of
books by Gordon McComb and Andy Rathbone, although the title is
the only attribute the two have in common. If you have the patience
to slog through bad editing, punctuation errors, smiley face icons
and ego-polishing anecdotes, you can mine a few useful tips from
Wedding Videography for Ding Dongs. The author, Kirk Thompson,
has owned a successful wedding videography business for 14 years
and his marketing advice is sound. However, it’s unfortunate that
he’s written this handbook exclusively for male videographers
because, as he writes, "It’s a man’s business, but by learning
to be sensitive to their needs, it’s not hard for a man to operate
in a woman’s environment." Thompson’s helpful tip here is
to hire a woman to work in your wedding business to rake in those
reluctant brides. 1

This guide for documentary film and video producers covers the
practical, technical and theoretical aspects of filming, from
fundraising to exhibition. Except where the context of a production
demands precision, the authors are not biased against the video
medium and "film" is used throughout Cross-Cultural
Filmmaking as a shorthand for both media. Although the title
would set the reader up for a treatise on ethnographic filming
techniques, this handbook is not restricted to cross-cultural
documentaries. The first of three sections discusses filmmaking
styles; the second section explains the technical aspects, including
how to select and use equipment, how to shoot film and video,
and the reasons for choosing one or the other. The third section
of the book outlines the process of filmmaking: preproduction,
production, post production and distribution.

Whether you’re out to shoot a feature-length movie about a foreign
revolution or simply hope to shoot a ten-minute video about your
grandparents, this handbook has the background information you
need to create an expressive film or video. 5